Germany says it will improve rights for single dads | Germany | News and in-depth reporting from Berlin and beyond | DW | 04.12.2009

Germany says it will improve rights for single dads

The German government has said it will make changes to its custody laws after the European Court of Human Rights upheld an unmarried German father's right to joint custody of his daughter. 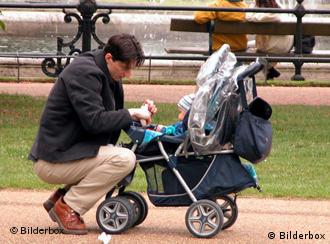 German Justice Minister Sabine Leutheusser-Schnarrenberger told the daily Sueddeutsche Zeitung on Friday that the government would soon consider changes to the law to take more account of fathers' interests.

The Free Democrat minister said there were many unmarried fathers "who wished to take more responsibility for their children, without entering a power-struggle with mothers."

However, Leutheusser-Schnarrenberger added that it was unlikely that single fathers would be granted a general joint custody of their children. Instead, she said she foresaw that joint custody might be granted without the explicit consent of the mother.

However, on Thursday the European Court of Human Rights found this violated European conventions against discrimination.

The Strasbourg-based court ruled that German courts had discriminated against a single father when they denied him joint custody of his 14-year-old daughter.

The 45-year-old complainant brought his case before the European court after exhausting all avenues in the German court system.

The Court of Human Rights only considers individual cases, but its rulings are important for setting precedents. It is usually incumbent upon European Union member-states to prevent a similar case from recurring.

Children just as harmed by divorce

German courts had argued that a decision against the mother would have harmed the interests of the child. The Strasbourg court conceded that children can be traumatized by custody disputes, but ruled that the situation was no different for married and divorced couples.

Although the complainant's plea for damages was rejected, the court ordered the German government to reimburse him for his legal fees.

Parents cannot be forced to maintain contact with their children, Germany's highest court ruled on Tuesday. The judges did decide, however, that they'd allow an exception to the rule. (01.04.2008)

Men desperate to know whether their child is really theirs can now do so without having to seek secret help from private DNA testing laboratories, thanks to a new law passed by the German parliament. (22.02.2008)

In Germany, recent reports show a new, more remunerative plan to encourage recent fathers to take paid parenting leave is starting to have an effect. (15.08.2007)