Prosecutors say they are investigating 100 professors across Germany on suspicion they took bribes to help students obtain doctorates. 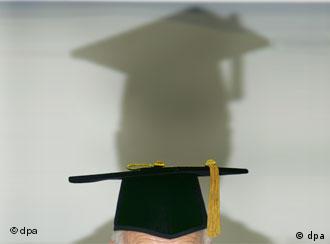 The value of education is not the same as its price

Cologne prosecutors' spokesman Guenther Feld confirmed on Saturday a report in German news magazine Focus that the professors were believed to have been paid through an intermediary firm.

"Supervising a thesis is a task that is part of a public service," Feld told the Neue Westfaelische regional newspaper. "Accepting a payment for it is unacceptable."

The price of success

The magazine said the investigation was launched after the offices of the private Institute for Scientific Counseling at Bergisch-Gladbach near Cologne were searched in March.

The institute reportedly acted as a facilitator between the students and the academics.

The head of the institute was sentenced to three and a half years in prison early last year for acting as an intermediary in the case of a Hanover law professor who helped students obtain a degree in exchange for financial or sexual favors.

The professor at Hannover University was found guilty of taking bribes worth 184,000 euros ($264,000) through the Institute, and organizing degrees for 61 students whose exam results weren't up to scratch. He was sentenced to three years in prison.

A law professor in the north-central German city of Hanover has been sentenced to three years in jail for taking money from students wanting to obtain doctorates. (02.04.2008)

A professor at a German university has been accused of taking more than the proverbial "apple for teacher" in exchange for inflated marks. He is accused of selling qualifications to the tune of nearly 185,000 euros. (08.09.2007)

For Nigerian student Olawale Abdulmajeed, becoming a doctor has always been his dream. Though his family wants him to succeed, he knows that it needs to be his own inspiration that drives him forward.

Humans can influence the weather ― to a degree. Today, cloud seeding, or artifical rain, is mostly used to bring water to drought-ravaged regions. But it's also been misused in the past.