Two police officers were shot dead earlier on Monday during a traffic stop. Federal Interior Minister Nancy Faeser described the killings as tantamount to an execution. 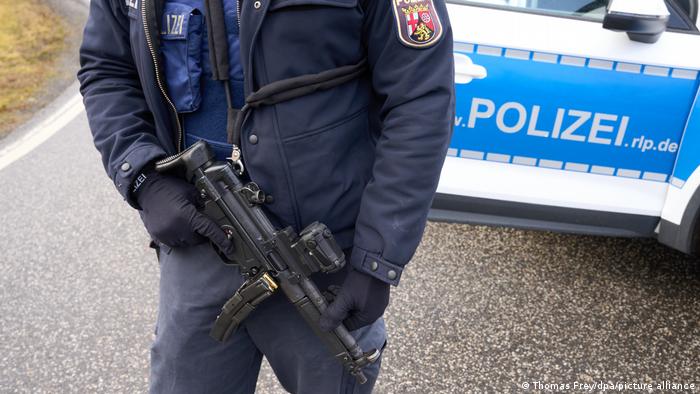 Special forces officers arrested a 38-year-old man in Sulzbach in the western state of Saarland following a wide manhunt. Another man, aged 32, was later arrested in the same area without resistance. The arrests took place about 37 kilometers (over 20 miles) from the scene of the shooting.

The suspects will be questioned to "reveal if there are other perpetrators," according to a police spokesman.

Earlier on Monday, a 24-year-old policewoman and her 29-year-old male colleague were shot dead in the district of Kusel, near Kaiserslautern, after a traffic stop.

Before dying, they were able to radio to colleagues, saying "They're shooting." They had reportedly seen dead game in the vehicle they had pulled over.

Police said in a statement that the 38-year-old had not made any statements on the matter and will be brought before the investigating judge on Tuesday.

Both suspects are reportedly German citizens. Police did not offer any motive for the killings. Weapons were seized during their searches.

The 38-year-old gave himself up willingly after contacting police through his lawyer. He was known to authorities after once fleeing the scene of an accident and having a weapons permit. He was described as a trader of wild game.

Federal Interior Minister Nancy Faeser described the killings as tantamount to an execution.

German Chancellor Olaf Scholz said in a post on Twitter: "I am deeply saddened by what happened in Kusel. My sympathies go out to the families of the two young victims. And I am thinking of the many police officers who risk their lives every day to protect us citizens. We must quickly clarify the background to the crime."

Violent police deaths are rare in Germany. In response to the killings, flags were flying at half-staff in the state.

Shootings are relatively rare in Germany, a country with some of the strictest gun laws in Europe. DW looks at Germany's gun ownership laws.