Two soldiers were brought in for questioning after a newspaper published photographs of German troops posing with a human skull while on a tour of duty in Afghanistan. Germany now fears reprisals against its troops. 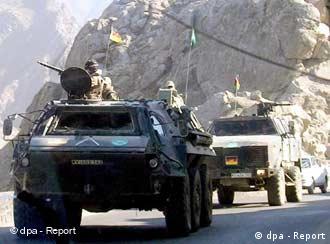 Photographs purporting to show German soldiers desecrating a human skill in Afghanistan, splashed on the front page of the country's mass-selling Bild newspaper on Wednesday, provoked shock and disgust in Germany.

"Such behaviour is absolutely inexcusable," Chancellor Angela Merkel said. "The government will investigate the soldiers involved and take rigorous measures against them," Merkel said.

Meanwhile, politicans have voiced fears of retaliatory attacks by Islamists against German peacekeepers in Afghanistan.

"I hope that such incidents don't happen again and the safety of our soldiers is not at risk," German Defense Minister Franz Josef Jung told German broadcaster ARD.

The chairman of the German Armed Forces Union, Bernhard Gertz said that there was a growing danger of attacks after the revelation of the shock photos. "The commanders (in Afghanistan) will have to consider what reactions they will have to deal with," Gertz said in a television interview. 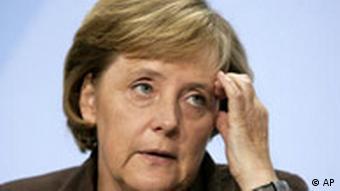 Chancellor Merkel was repulsed by the pictures

The Bild newspaper wrote that a member of the German Armed Forces claimed that the pictures showed German peacekeepers of the NATO-led International Security Assistance Force (ISAF) unit near the capital Kabul in early 2003.

"Their irresponsible and inexcusable behaviour damages the reputation of the Bundeswehr and our country," said Germany's Foreign Minister Frank-Walter Steinmeier.

The general inspector of the Bundeswehr, Wolfgang Schneiderhan, said that one of the two soldiers who were brought in for questioning was still on active duty, while the other one is no longer in the army.

According to a report in the Mitteldeutsche Zeitung, the two men belonged to the same mountain troops unit from the southern German state of Bavaria.

The state prosecuter's office in Potsdam, outside Berlin, confirmed that it had launched a criminal investigation into the affair on charges of "disturbing the peace of the dead."

"Runs counter to our values" 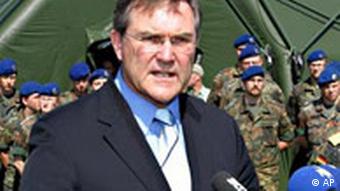 In the published photos, the uniformed men are seen holding up the skull and posing with it on a jeep like scalp hunters. In another picture, a solider is seen exposing himself while holding the skull in his other hand.

"These pictures revolt and mystify me," Defense Minister Jung said. "It is clear that such behavior cannot be tolerated from German soldiers. It runs counter to the values and codes of conduct we try to instill in our soldiers. People who behave like this have no place in the Bundeswehr."

The newspaper said it was unclear where the skull came from, or whether it belonged to an Afghan or dated back to the Soviet occupation in the 1980s. It may also have been found in an alleged "mass grave," the paper wrote.

As yet, Bild is the only confirmed source for the allegations. 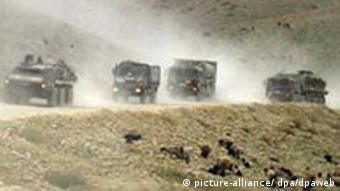 The scandal broke just hours before the German cabinet decided to extend the mandate of its troops taking part in the US-led campaign against terrorism code-named "Operation Enduring Freedom" by one year.

The extension gives Berlin the option of redeploying its KSK elite forces in Afghanistan to help fight the resurgent Taliban.

It also coincided with the release of the defence ministry's first major policy manifesto since 1994, which Jung said paved the ground for Germany's readiness to take on more international peacekeeping missions.

Germany is the second biggest contributor of peacekeepers to Afghanistan with 2,750 troops and holds the command of ISAF in the north.

The Bundestag, or lower house of the German parliament, voted last month to extend their mandate in Afghanistan until October 2007.

US Pressures Germany to Send Troops to Southern Afghanistan

The US has urged Germany to send troops from northern Afghanistan to hot spots in the south, while Taliban leader Mullah Omar released a video warning fighting will heat up even more. (24.10.2006)

Germany's mission as part of the NATO-led international force in Afghanistan will be extended by a year after lawmakers approved a renewed application for the Bundeswehr's mandate. (28.09.2006)

German Foreign Minister Frank-Walter Steinmeier began his first visit to Afghanistan by urging the international community not to forget the war-torn country and reiterating Germany's own commitment. (21.08.2006)