European minnows Cyprus gave another rousing performance in Nicosia on Wednesday by holding soccer superpower Germany to a famous 1-1 draw in the latest round of Euro 2008 Group D qualifiers. 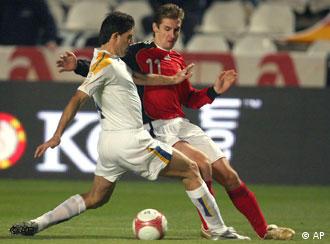 Germany, who knocked 13 past San Marino, found Cyprus a tougher proposition despite missing a hat-full of chances in the second half and German coach Joachim Löw could not hide his dismay at dropping two valuable points against the rank outsiders.

"It's obvious we are not pleased with the result. This was a tough and at times physical games," Löw told reporter afterwards. "We were mentally and physically tired...but we won't ponder too much on why we failed here, this is only one negative result in a successful year," he added.

However, he did concede that it was a "fair result" and warned the other teams in the group it will be "difficult playing in Nicosia."

His opposite number Angelos Anastasiades was the happier of the two coaches after securing a result that will look good on his CV. "It's a satisfactory result considering who we were playing, they are a bigger and better team and three times world champions," said Cyprus' Greek coach.

"We were equal to the Germans for 70 minutes but we began to tire towards the end but they could only threaten us with crosses," he added.

This was a less than a dominant performance from the leading scorers of the group but Germany now head the standings on goal average.

Following the 5-2 thumping of Ireland in their previous home game, Cyprus were gunning for greater glory against the mighty Germany.

The depleted German side started cautiously as they sized up their plucky opponents in what proved to be a difficult fixture. 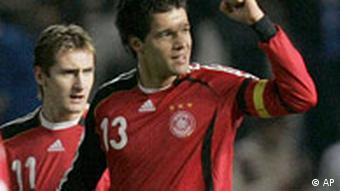 Ballack was Germany's only positive in Cyprus

The Cypriots took the game to the visitors from the kick-off and looked to get their pacey forwards behind the opposing defense. And it was a surprise when Germany took the lead on 15 minutes after a well-worked free-kick.

Torsten Frings touched the ball to captain Michael Ballack who fired a 25-yard screamer into the bottom right hand corner of the net, leaving the keeper clutching at air.

It was Germany's first shot on target with the Chelsea star carving out more opportunities in the game but failed to repeat his goal touch.

The Cypriots kept pushing forward and never lost confidence, and those expecting Germany to cruise to a comfortable victory were proved wrong.

Cyprus's endeavor was rewarded with a goal close to half time when Yiannakis Okkas hit a first-time volley on the edge of the area that flew past keeper Timo Hilderbrand. The cross was supplied by Larisa's Efstathios Aloneftis whose pace on the left wing proved a handful all night.

After the interval Chelsea's midfield maestro -- the best player in a German shirt -- urged his team forward in search of victory. Ballack's best chance saw a header flash wide of the post from six yards on 55 minutes. Three minutes later the disappointing Miroslav Klose scuffed a shot when he was found unmarked inside the box. 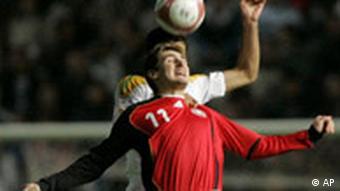 Germany were often second to the ball

The Cypriots survived a few more close encounters, especially a Bastian Schweinsteiger volley that was cleared off the line by Lambros Lambrou. The Bayern star almost stole the show at the death but his shot from close range went the wrong side of the upright on 89 minutes.

But the goal mouth action was not confined to one end only, with Cyprus also pushing for an unlikely winner and Aloneftis almost lobbed the keeper from the edge of the area just after the hour mark.

The Cypriots -- ranked 80 in the world -- viewed the game as the ultimate test to gauge how far Cyprus can compete with the very best. They passed that test with flying colors.

A German fan ran on to the pitch at the start of the second half and stole the ball from the centre spot, his countrymen maybe wishing the game never restarted.

Germany's national soccer team is to play against Cyprus in a Euro 2008 group qualifier on Wednesday, and coach Joachim Löw is left with a sparse roster as several key players won't be able to make the trip. (14.11.2006)

Germany put on an impressive display Wednesday in their latest European Championships qualifier, beating Slovakia 4-1 in Bratislava. The crushing victory was marred by crowd trouble as German fans fought with police. (12.10.2006)

Podolski Booked as Germany Down Georgia 2-0

Germany striker Lukas Podolski was sent off three minutes after halftime and was joined by his victim 14 minutes later as Germany defeated Georgia 2-0 in a friendly international in Rostock Saturday. (08.10.2006)