German federal prosecutors have indicted three men, two of them Germans who had converted to Islam, for a plot to explode half a ton of explosives at places frequented by US nationals. 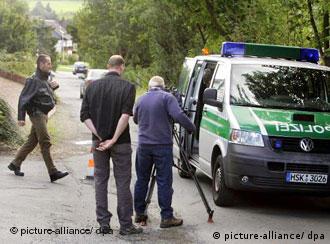 German federal prosecutors have indicted three men, two of them Germans who had converted to Islam, for a plot to explode half a ton of explosives at places frequented by US nationals.

Police, who had eavesdropped on the plotters' communications and intervened to surreptitiously confiscate the main ingredient in the explosives, arrested the men a year ago.

If the bombing had succeeded, it would have been Germany's bloodiest experience by far of Islamist terrorism.

Fritz Gelowicz, 29, Daniel Schneider, 22, both Germans, and Adem Yilmaz, 29, a Turkish national, are to be tried by a state superior court in the western city of Düsseldorf, a spokesman for the prosecutors in Karlsruhe said.

Many Germans are shocked that the men had ordinary German upbringings, unlike the radicals who were born in Arab countries and moved to Germany to plot the Sept. 11, 2001 suicide attacks on New York and Washington using hijacked airliners.

Police around Europe say home-grown terrorism has become as big a threat as that from radical immigrants.

Gelowicz, said to have led the plot, converted to Islam and allegedly resolved five years ago to join the "jihad" or holy war against the West.

The precise allegations against the men were not disclosed, but the indictment accuses them of membership in a terrorist organization on German soil and abroad, which are two separate charges.

Schneider was also indicted for the attempted murder of a policeman because he grabbed a gun and fired it while fleeing arrest on Sept. 4, 2007.

Earlier statements by the prosecutors said the group was assigned to carry out the attack by the Islamic Jihad Union, a group of Uzbek origin that has its camps in Pakistan or Afghanistan.

Locations chosen to target US citzens

They bought 12 drums of hydrogen peroxide to mix explosives. Police surreptitiously replaced it with a diluted chemical to thwart the men.

Federal magistrates hearing the case have said the trio had planned to detonate several bombs "in the near future."

Investigators have not identified the potential targets, but believe booby-trapped rental cars were to be parked at the doors of bars and nightclubs frequented by US citizens or outside an airport.

Germany's top security official said in an interview that confirmation of Germany's first suicide bomber blowing himself up in Afghanistan and recent al Qaeda threats represent a real and growing terrorism danger. (22.05.2008)

The investigation into the terrorist bomb plot in Germany is likely to take months, the federal prosecutors office said Saturday, while the justice minister called on Muslims to report radicals to the authorities. (08.09.2007)