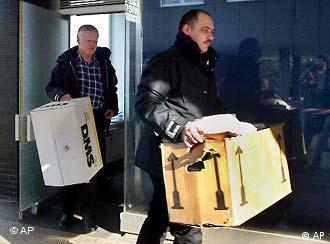 German authorities on Thursday arrested a group of at least three suspected Islamic terrorists, including one they say may have been an aide to Mohammad Atta, the Hamburg-based mastermind behind the Sept. 11 attacks on the U.S. The arrests followed police raids in the cities of Münster and Minden in the western German state of North Rhine-Westphalia. Chief Federal Prosecutor Kay Nehm said the men, alleged members of Islamic extremist organizations, had been involved in the planning of bomb attacks on U.S. facilities in the Frankfurt area between 2001 and 2002. The bombings were never carried out. Nehm accused the groups of conducting "aggressively militant Islamic fundamentalism," which is a crime under German anti-terror laws passed after Sept. 11.

German Health Minister Ulla Schmidt spelled out on Thursday the long-awaited details of a health reform package that is designed to save the government billions of euros. The key changes would include the creation of a bonus system that would reward patients with such things as lower co-payments for prescription drugs if they went for regular checkups. Another goal of the changes would be to increase competition between doctors as a way of cutting costs. Schmidt termed the package "the great leap" and urged Germany's opposition to begin talks immediately with the plan.

Internet access in Germany has climbed above the European Union average, the German Statistics Office said Thursday. Around 16 million German households, or 43 percent, have access to the Internet. The European average is 40 percent. But Germany still lags behind such European leaders as the Netherlands (66 percent) and behind the United States (50 percent)

Tackling the Reform Problems of Germany

Following the distrastrous results for the Social Democrats in Sunday's elections, Chancellor Gerhard Schröder will have to rely on his politicial opponents to help solve the country's pressing problems. (Feb. 4, 2003)