Suspects believed to have stolen almost €1 million after bombing several ATMs across Germany have been arrested. The operation was the result of Dutch-German cooperation. 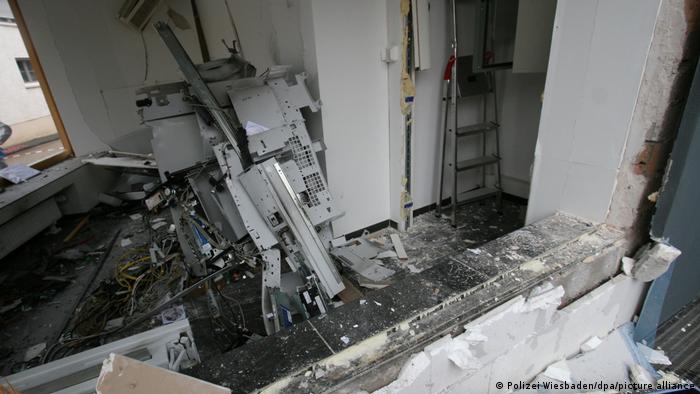 The bombings caused almost €1 million worth of damage

Police in the Netherlands have arrested three suspected gang members in connection with a series of robberies at ATMs across Germany, Europol said on Thursday.

The suspects allegedly used explosives on the ATMs, gaining access to €958,000 ($1 million) in cash held by the machines.

The arrests were made on Tuesday in the Dutch cities of Haarlem and Vianen.

A total of eight ATMs across four German states were targeted: Hesse, Baden-Württemberg, Lower Saxony and Rhineland-Palatinate. The robberies occurred between October and November 2021.

The explosions also caused almost €1 million in damages to the premises.

One fugitive still on the run

The operation in the Netherlands was coordinated by Europol and followed a monthslong investigation by both Dutch and German police forces.

Europol's Serious Organized Crime Center was also involved with the aim of dismantling the criminal gang.

German police already arrested three other members of the gang in Hesse at the end of March. One other suspect is still on the run, with law enforcement still seeking to confirm their identity.

Last September, Dutch and German police said they had taken down a gang that was making video tutorials on how to break into ATMs using this method.

One person was killed during a training session at an underground center in the Dutch city of Utrecht used for practicing the explosive attacks.

AFP contributed to the reporting of this story.