Germany exported twice as many weapons and other military technology over the past five years, according to a Stockholm International Peace Research Institute report. 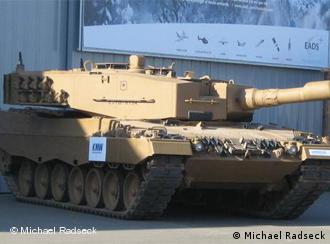 Germany is a big exporter of tanks

Germany doubled the amount of its arms it sold abroad in 2004-2009, compared to that exported during the previous five-year period, according to a report by the Stockholm International Peace Research Institute (SIPRI) released Monday.

Germany is the world's third leading exporter of conventional weaponry.

Most of the German exports were armored vehicles. More than 1,700 of them were sent to 21 countries; the majority were second-hand. The most common destination was elsewhere in Europe, but some were sent to places like Singapore, China and Brazil. Germany's market share increased from 6 percent to 11 percent.

But the largest buyer of German exports was Turkey, which accounted for 14 percent of the arms shipped abroad. The second- and third-largest buyers were Greece and South Africa, respectively, followed by South Korea, Spain, Austria, Italy, Malaysia, Australia and Chile.

The world's largest arms exporters were the United States, Russia, Germany, France, and the United Kingdom. The ten most prolific importers were all Asian countries: China, India, South Korea, Singapore and Pakistan.

What SIPRI found most worrying was the increase in areas with regional tensions.

The institute said the volume of weapons traded to India and Pakistan had "increased significantly" in the last few years and was expected to continue. In South America, it went up 150 percent in the last five years.

The same cargo airlines used to bring food and other aid supplies to Africa are also being used in arms smuggling, according to a new report by the Stockholm International Peace Research Institute. (12.05.2009)