Germany confronts tough decisions in the face of sanctions on Iran | World| Breaking news and perspectives from around the globe | DW | 29.09.2009

Germany confronts tough decisions in the face of sanctions on Iran

In the wake of further missile tests, it's becoming more likely that the West will impose further sanctions against Iran. But is Germany the weak link in attempts to bring Tehran to the table? DW spoke to an expert. 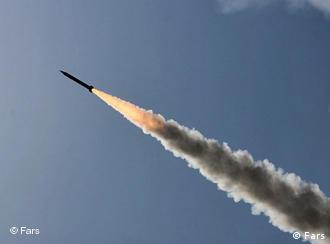 The UN Security Council's five permanent members and Germany are scheduled to begin talks with Iran in Geneva on October 1 in an effort to diffuse tensions created by Tehran latest tests of short and medium-range missiles. The goal is to end the impasse over Iran's nuclear ambitions.

But few people expect any sort of major breakthrough, and if the issue remains unresolved, the result could be stepped-up sanctions by the West against Iran.

In an interview with German public broadcaster ARD, the Bush administration's former point man on Iran, Nicholas Burns, said Germany had not been as stringent on sanctions as France or the UK, and he called for greater solidarity from Berlin with the US-led effort to rein in Tehran.

Deutsche Welle wanted to know if there was truth to the idea that Germany, which is heavily dependent on exports, has been comparatively soft on Iran. So we talked to Michael Bauer, an Iran expert at the Center for Applied Political Research at the University of Munich.

DW: What is the extent of Germany's trade with Iran?

Bauer: Germany was, in the past, a very important trading partner for Iran. In the wake of the conflict over Iran's nuclear program, the volume of trade has continually decreased, but Germany was and is an important partner in the areas of machinery and technology. 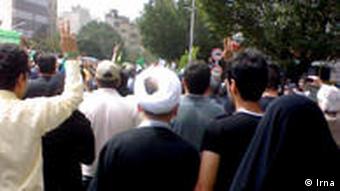 Iranian government repression of the opposition is another issue

DW: Has Germany pulled its weight vis-à-vis sanctions in the past?

Bauer: The German government tries to encourage German industry to limit trade with Iran. But there haven't been any strict laws formulated as is the case in France or, above all, in Great Britain. That's the reason for the current accusations. But one has to remember that Germany is historically a more important trading partner for Iran than either France or Great Britain. So the government here is under more pressure from industry not to put German business interests at risk prematurely. That's the problem the German government faces.

DW: What will Germany's impending change of government mean for its policy toward Iran?

Bauer: I don't think there will be a major turnaround. I think Germany will continue to play a leading role in negotiations within the framework of the EU Big 3 plus, China, Russia and the US. The new government will have the same dilemma as the old one, namely that they hope that there'll be a breakthrough in relations with Iran so that sanctions won't be an issue any more. And on the other hand, German industry fears that, when sanctions are lifted, they'll be too far behind China and Russia to get out of the starting blocks.

The new government will face exactly this problem. German industry knows how important it is for the Iranian people to have access to foreign machinery and technology, and they hope that, should the conflict over Iran's nuclear program be resolved, they'll be able to do business in Iran without any problems. 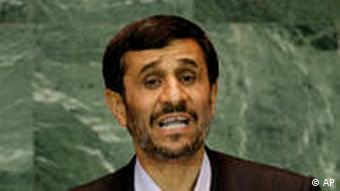 DW: Are there are options other than sanctions?

Bauer: I think it's fundamentally difficult to use sanctions to compel a large oil-producing country like Iran to change its policies. Iran's oil and natural-gas reserves make it a very attractive partner for China, Russia and other countries. So you have to ask: How sensible are sanctions, if you know right from the start that they're their effectiveness is going to be limited?

With reference to Barack Obama, there were hopes - supported by statements he himself made - that there'd be a change in US policy toward Iran, similar to the shift toward China under Nixon. Right now, of course, the situation is very difficult after the election fraud and the brutal treatment of protestors. It's hard to approach such a government. But that's in fact the alternative: to take Iran's security concerns vis-à-vis the West seriously and try to allay those fears so that relations take a more positive path. Nonetheless, it probably won't come to such a paradigm shift within the situation we're in now.

Reports that China is exporting gasoline to Iran are potentially burdening US and EU efforts to increase pressure on the government in Tehran. But the West has its work cut out for it to win China over, analysts say. (24.09.2009)