Ten years ago on Monday, same-sex unions were enshrined into Germany law. To mark this anniversary, Deutsche Welle spoke with the Duysens, who rushed off to the marriage registry as soon as the law was passed. 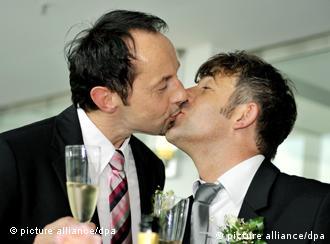 Germany marked 10 years on Monday since the introduction of the civil union law allowing same-sex couples to have their relationships officially recognized by the state.

Since then, over 23,000 gay and lesbian couples have walked down the aisle, so to speak, at local registry offices around the country to pledge to spend their lives together. Gay couple Wolfgang and Werner Duysen are taking stock of the registration law, as well as their own upcoming 10th wedding anniversary.

The Duysens had actually wanted to be among the very first in Germany to celebrate their union after the passing of the partnership law. Had they had it their way, they would have tied the knot on August 1, 2001, the very day the law came into force. Due to a minor hiccup, however, they had to wait a short while until their registry office in the town of Pinneberg in Schleswig-Holstein state was sent the updated software to officially allow their union.

Nearly two weeks later, it was official. Both men turned up in black suits and roses in their lapels, ready to be recognized.

Wolfgang Duysen remembers that day fondly, but says it was not without its quirks. 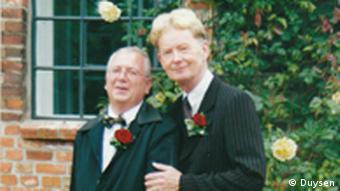 Wolfgang, left, and Werner Duysen have been officially recognized since 2001

"Yeah we were rather nervous, but I think our registrar was even more nervous. It was the first ceremony she'd ever done and she wasn't actually allowed to use the word 'marriage,'" he recalls. "It was quite funny though, as she let the word slip out during the ceremony and we all laughed."

It was not only the registrar who may have been a little overwhelmed at around this time. German conservatives and the Catholic Church were in a whirl, warning that registered partnership for same-sex couples would mean the end of the traditional family.

A handful of states then governed by the conservative Christian Democrats (CDU) brought a complaint against the law before the Constitutional Court, but with little success. Even the governing center-left coalition of the Social Democrats and Greens was unable to unite over how far the equality of gay and lesbian couples should go.

The result was a law allowing same-sex couples to have their unions recognized at registry offices around Germany, but one which stopped short of granting full marriage status. It would also be a law which maintained a handful of inequalities. For example, same-sex couples don't benefit from lower tax rates, they aren't allowed to adopt and in the case of the death of one member of the couple, their widow or widower isn't entitled to any payout from health insurers. 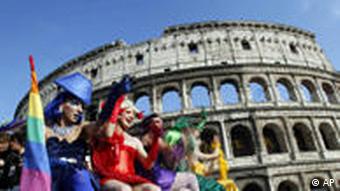 Despite this, the registration law was still celebrated as a big step forward for same-sex couples, says Manfred Bruns, a legal advisor with the German Lesbian and Gay Federation (LSVD).

"Well we'd been calling for such a law for quite a long time, but we wouldn't have believed it would actually come so quickly. For me, it's really proof that our democracy works - the fact that it's possible for minorities to organize the majority to achieve something like this," he says.

Two steps forward, one back

For the law's 10th anniversary, the LSVD organized a meeting at the Berlin City Hall. The crowd consisted mainly of older men and women sitting between the marble columns of the Great Hall, surrounded by oil paintings of great scenes from history. Many gathered there were campaigning on the streets back in the 1970s and '80s for the rights of gays and lesbians.

It was around this time that Wolfgang and Werner Duysen first got to know each other. The pair holidayed together in Venice all those years ago, and joked about a picture of them taken at Saint Mark's Square as being their wedding photo. But Werner says, back then, the prospect of any kind of formal union between them was but a dream.

"I was working in human resources at an insurance company, and each time Wolfgang called me, I had to pretend his name was Sabine," Werner remembers. "'Sabine, how're you going,' I'd have to say." 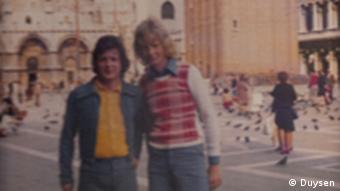 The Duysens visited Venice back in 1973

But the recognition of same-sex unions in Germany was not without its detractors in the gay and lesbian community itself. Wolfgang Duysen says many were disappointed the law stopped short of guaranteeing same-sex couples the same rights as heterosexual couples. In 2009, the Duysens fought for equality for widows and widowers before the Constitutional Court, and other same-sex couples have brought similar complaints before the courts.

"You can't discriminate against someone just because they don't fit into a particular category. Gender equality must be realized, and we'll keep pushing for this. We'll fight to the very last, as they say."

German conservatives still have other ideas, however. On Monday, efforts to put gay marriage back on the political agenda were doused when senior lawmakers from Chancellor Angela Merkel's CDU reiterated their stance that legal differences must remain between heterosexual marriage and same-sex partnership.

An annual gay pride parade in Zagreb passed largely without incident on Saturday. It came a week after violence marred a similar event in the country's second-largest city, Split. (18.06.2011)

Rome erupted in spectacle Saturday as thousands marched for gay rights - and against the conservative Italian regime. In two other Catholic countries, Poland and Croatia, pride marchers faced violent threats. (12.06.2011)