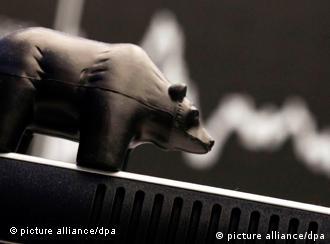 Germany called for a Europe-wide ban on short-selling Friday after four EU partners took the step of prohibiting the trading strategy in a bid to contain the eurozone debt crisis and calm jittery markets.

"The German government has been monitoring the problem of short-selling for some time and thus banned naked short-selling in Germany last year," said a spokesman for the Finance Ministry. "In addition, we are calling for a broad short-selling ban in Europe."

Short-selling is the practice of borrowing shares you do not own and selling them when their price is high on the assumption that the share value will drop. The same quantity of shares is then repurchased at a lower price and the difference is banked.

This form of profiteering on market losses can give the impression of a mass sell-off of shares, hence driving down their worth and fuelling market instability. France, Italy, Belgium and Spain all put a hold on the trading method Friday as it pertains to stocks in a collection of banks and large insurers.

Shares in banks and other large institutions, notably insurers, have fluctuated wildly in recent weeks on the back of the eurozone debt crisis emanating from countries such as Greece, Italy, Portugal and Ireland. It's believed short-selling may have added to instability.

The European Securities and Markets Authority (ESMA) said restricting the "abusive use of short-selling" was "an effective tool to calm the market." 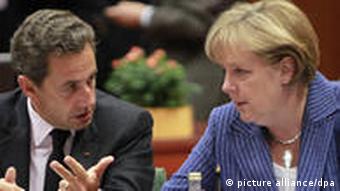 "They have done so either to restrict the benefits that can be achieved from spreading false rumors or to achieve a regulatory level playing field, given the close inter-linkage between some EU markets," ESMA said in a statement on its website.

"These measures have been aligned as far as possible in the absence of a common EU legal framework in the area of short-selling and given the very different national legal bases on which such measures can be taken."

However, critics point out that a similar ban in the US was not effective. Several academic studies showed that while share borrowing fell during the three-week ban, financial stocks continued to plummet.

"If you talk to people who understand the technology of markets, including regulators, it's the general consensus that banning short sales doesn't achieve the stated objectives," Nicholas de Boursac, chief executive of the Asia Securities Industry and Financial Markets Association, told the Reuters news agency.

France and Spain have banned short-selling on select institutions for 15 days, while Belgium has banned the practice on four financial stocks indefinitely. Details of the Italian ban were not immediately clear.

The ban came into effect a day after the leaders of France and Germany called for a joint meeting to draft a common solution to the turmoil that has rocked European stock markets over the past week and raised doubts over the viability of the eurozone.

The proposals, announced at a special eurozone summit held July 21, will also be addressed by a working group under European Council President Herman Van Rompuy.

Eurozone economic heavyweights Germany and France have scheduled a joint meeting to address the financial unrest gripping Europe. But critics say a lack of European leadership is making the situation worse. (11.08.2011)