Germany has banned the cannabis-like drug Spice because of its potential danger to health, an announcement by the ministry of health said Wednesday. 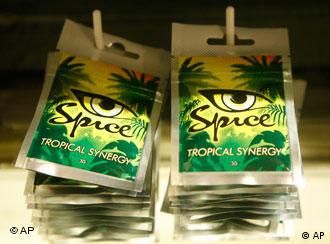 Manufacturing, possession and dealing in the drug will be a criminal offence from Thursday, the statement said. Spice has enjoyed growing popularity among young people in Germany where it has been sold as a natural herbal mixture, thus circumventing anti-drug laws.

But tests showed it contained the potentially harmful chemical called CP-47, 497, which has the same effects as the natural psychoactive substance in cannabis, but is up to four times stronger.

"Spice is not harmless and needs to be withdrawn from circulation quickly," said Health Minister Ulla Schmidt.

Drug Commissioner Sabine Baetzing said it had been proven that the manufacturers of Spice had laced the natural herbs with a synthetic narcotic drug.

"Selling Spice as a harmless smoking fragrance is fraudulent," she said.

Tests have shown that smoking the drug can cause hallucinations and lead to undesirable side affects such as panic attacks and nausea.

The ban, which carries a fine for those who ignore it, will remain in force for 12 months until a more permanent law is introduced.

The production, trade and sale of the in-drug "Spice" will likely be illegalized from January under German narcotics laws, the country's federal drugs commissioner said in Berlin on Tuesday. (30.12.2008)

German researchers are warning that using marijuana can have serious psychological side effects. Men who use cannabis risk becoming antisocial while women often become depressed and insecure. (22.12.2008)

Authorities frowned upon a Berlin store's interpretation of the term "sugar high." Police have closed the shop after finding candies laced with hallucinogens. (15.09.2008)