Germany acknowledges ′warlike situation′ in Afghanistan | World | Breaking news and perspectives from around the globe | DW | 28.12.2010

Burdened by its Nazi legacy, Germany swore never again to wage war. In the last of a three-part series, DW examines the country's decision to deploy its military in Afghanistan, and the 'warlike conditions' there. 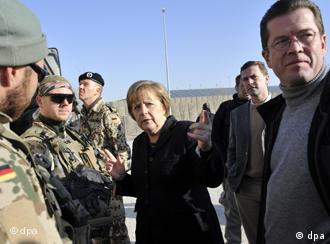 Merkel has referred to 'warlike conditions' in Afghanistan

A political shockwave reverberated across the Atlantic Ocean after Islamic terrorists razed the World Trade Center and part of the Pentagon on September 11, 2001. In keeping with Germany's responsibility as a NATO member, Chancellor Gerhard Schroeder declared unlimited solidarity with a wounded America.

Schroeder's declaration carried sweeping military consequences for Germany. Only three years after his left-of-center coalition had participated in NATO's air war against Serbia, he deployed soldiers for an ambitious stabilization mission in war-torn Afghanistan. 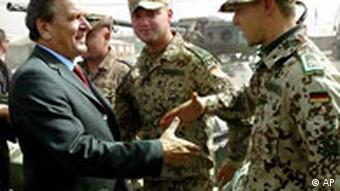 Ex-Chancellor Schroeder showed solidarity with the US in sending troops.

Germany's stabilization mission looked increasingly like a counterinsurgency as its soldiers faced a resurgent Taliban. And in September 2009, tensions came to a head when a German colonel ordered an airstrike against two Taliban-hijacked fuel tankers. The strike killed 142 people, laying bare the realities of the Afghan conflict for the German public.

After years of whitewashing the conflict in Afghanistan, Berlin has been forced to acknowledge that its soldiers are fighting and dying under "warlike conditions." Germany can never again claim that it will never wage war.

In the days following September 11, Germany rallied behind the United States as the Bush Administration assembled a military coalition to retaliate against the perpetrators of the attacks in New York and Washington D.C.

"Initially, Operation Enduring Freedom was mandated through the United Nations while NATO invoked Article 5 for the first time," said Ludger Volmer, former chairman of the Green Party who served as Deputy Foreign Minister at that time. "The USA had been attacked and Article 5 required Germany to make a contribution."

But Germany's support for America went beyond legal obligations, according to Volmer. Many Germans felt a deep emotional bond with their historical ally, creating a political climate in which participation in an offensive military campaign could be openly discussed.

"The German people made spontaneous displays of solidarity with the American people," Volmer said. "Many Germans said the Americans helped us against Hitler and protected us during the Cold War and now we have to return the favor."

This solidarity ran into obstacles on the political front, however. Although the German military had participated in the Kosovo War of 1999, anxiety about military force remained deeply rooted in the national psyche. Many Social Democrats and Greens worried that Germany would be dragged into an open ended, global war. 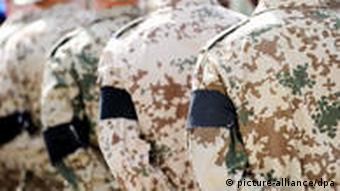 Over the years, flag-draped caskets began returning to Germany

But in a political power play, Schroeder tied Parliament's vote on Operation Enduring Freedom with a vote of confidence. If antiwar skeptics among the Social Democrats and Greens voted against the war, they would also be voting against their own government.

Faced with the choice of political influence or principle, most Social Democrats and Greens closed ranks and threw their confidence behind their coalition government. The resolution passed, allocating 3,900 soldiers for Operation Enduring Freedom and saving the government from collapse.

As the United States waged war in pursuit of the perpetrators of September 11, the international community designed a stabilization force to ease the impact of the conflict on civilians.

"The next step in the discussion was to demand that the military strikes not be directed against the Afghan people," Volmer said. "Instead, the Afghans should benefit from the intervention."

While OEF had been tasked with rooting out the Taliban and Al-Qaeda, the International Security Assistance Force would seek to create a secure environment in which Afghanistan could build a postwar future for itself. Berlin sought to keep OEF and ISAF - war and stabilization - clearly separated from one another with an emphasis on putting ISAF in the lead.

"That again has to do with history," said Karl Lamers, former foreign policy spokesman for the Christian Democrats."We don't do war. We conduct other actions that demand the use of force."

But Berlin's policy began to send mixed messages. In 2004, German soldiers set up shop in the Northern Afghan city of Kunduz, where they assisted civilian reconstruction efforts. However, they became increasingly entangled in ambushes, mortar attacks and running gun battles as the Taliban made a comeback. The distinction between stabilization and war had become blurred.

As the years passed, flag-draped caskets returned home, and terrorists increasingly targeted Europe, the justification for the mission became more self-assertive. Slowly, German defense experts began to take ownership of the conflict by identifying it as being in the national interest. 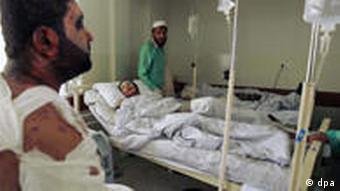 The Kunduz strike killed 142 and left many wounded in hospitals

"Later we recognized what Defense Minister (Peter) Struck had pointed out: We are also defending Germany's security on the Hindu Kush," said Hans-Ulrich Klose, a leading foreign policy expert within the Social Democratic Party. "This view was supported by the attacks in London and Madrid and through the clear fact that there's something like a home-grown but foreign-trained terrorism that threatens us all."

In September of 2009, the simmering security situation in Northern Afghanistan boiled over. Colonel Georg Klein, commander of the German soldiers in Kunduz, ordered American bombers to eliminate two Taliban-hijacked fuel tankers. The airstrike killed 142 people. Many of the dead were civilians.

Klein defended his order by claiming that he had believed the tankers would be used as an explosive device against his soldiers. However, the subsequent investigation by ISAF indicated that Klein targeted the people, not the tanker itself. Local Taliban leaders may have been among the crowd.

A German officer had launched a preemptive strike against a perceived threat orchestrated by a human enemy. Germany had waged war in front of the entire international community.

In the aftermath of the Kunduz bombing, Defense Minister Karl-Theodor zu Guttenberg acknowledged that the German army was operating under "warlike conditions." And after three soldiers died in a Taliban ambush in April of 2010, Chancellor Angela Merkel made a similar admission. During the nationally televised memorial service for the fallen, Merkel expressed understanding for soldiers who said they were fighting in a war.

So what do observers think of politicians' attempts to find a label just short of 'war' for the unconventional conflict in Afghanistan? According to Lamers, it's a legal sideshow - one that began with the debate over the Gulf War, raged during the Yugoslavia crisis, and has been partially exposed by the Kunduz airstrike.

Military force - however it may be labeled by the political establishment - is now a regular and tolerated feature of German foreign policy. Germany no longer faces a national historical dilemma of whether it can use force at all. Rather, it has returned to history and once again confronts the broader human question: Under what circumstances is military force justified?

"It's a question for all of us that nobody can definitively answer yet, but which we have to discuss intensively with one another," Lamers said. "How do we position ourselves in a world where there are still cases like Afghanistan? How do we deal with that? Do we just say that we can't do anything about it? Or if we can do something, what exactly should we do?"

Considering its tainted history, Germany will have to be especially careful in its search for an answer.

The German cabinet has agreed a reform which will reduce the size of the military and suspend compulsory service from July on. As a result, the last draft will be on January 3, 2011. (15.12.2010)

German support for NATO's Afghanistan campaign began under a left-wing government and continued under a grand coalition. But with the public growing ever more skeptical, old political frontlines could start to reappear. (22.04.2010)