Germans take their dogs almost everywhere, and some claim the nation's relationship to them is unique. At least, it seems to be the only place with a reality TV show set on finding the most talented, telegenic pup. 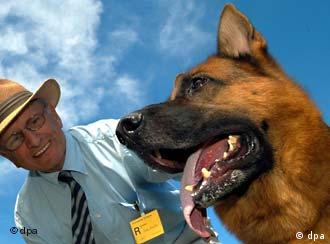 Last week, the pooches on "Top Dog" started to show their mettle, but not exactly to the humans' satisfaction. The canine contestants were expected to fetch a toy from a swimming pool and paddle back out with it locked between their jaws.

Few of the dogs were up to the task, especially not Jason, a surprisingly obedient beagle who had never learned to fetch, and Kassam, a carefully coiffed poodle whose owner didn't want him to get his hair wet. 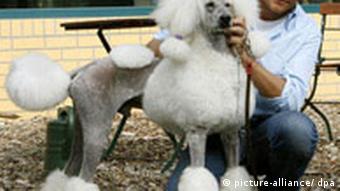 Kassam's master was not keen on his hairdo getting mussed

In the end, only Murphy, a Jack Russell terrier, and Pinsel, a Dalmatian, passed the test, and it looked like the judges were going to disqualify all but the two "good dogs." But the show was set to go on for one more month, and they couldn't just leave all those dog-loving viewers in the lurch.

After all, Germans are crazy about their pups. Unlike most Europeans, they take them along when they go out to eat, when they sit in cafes and when they go on vacation. At a Christmas market recently, a couple was seen sharing a bratwurst with a small white dog perched atop their table -- to the approving murmurs of passersby.

"Dogs are viewed with great sympathy by German dog owners and non-owners alike," said Udo Kopernik of the German Kennel Club. "Only a small percent, around 6 percent, aren't sympathetic toward dogs."

Part of the family 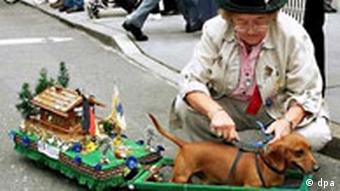 With around five million of them -- around 0.6 per capita -- Germans actually have far fewer dogs than most other Europeans, Kopernik said. Only Turkey has fewer per capita, while Britain, Scandinavia, the Czech Republic and Poland have twice as many. The Germans' pooches, however, are much more visible in everyday life.

"Dogs have a different value in Germany than elsewhere," Kopernik said. "You see more dogs than in, say, Italy or France, though they have more dogs. In Germany, dogs tend to be family members who you take along on outings and vacations. You don't see dogs being kept as accessories here."

Germans' special relationship to their pups has to do with their special history, according to Wolfgang Wippermann, a professor of history at Berlin's Freie University and author of a book on the Germans and their dogs.

The country's postwar division, for example, had an affect on Germans' pets just as it did on every other aspect of their lives, Wippermann wrote. In West Berlin, in particular, dogs became a symbol for the freedom that the city isolated by the Wall revelled in. 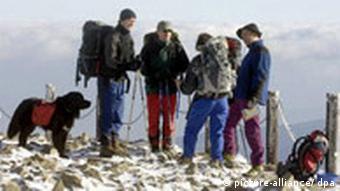 These days, the average German dog owner is married and has at least one child, and a German shepherd or a dachshund are likely to be the canines they snuggle up to on a cold winter's night.

Though the pooches may be taught obedience, the masters appear to be resistant to training. A dog-owner reaching into his pocket for a plastic bag to dispose of his friend's feces is a rare sight in Germany. And requirements to keep dogs on leashes must be among the most often violated laws in the country. 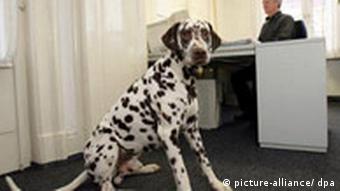 Why stay home alone when you can join your master at work?

"Through their dogs, the Germans become anarchists," said Wippermann. He suggested that an anti-authoritarian impulse causes obedient Germans to find satisfaction in their dogs' criminal activities. "They can do what they want; they can shit where they want."

That may be the reality for Germany's dogs, but it certainly isn't for the remaining "Top Dog" contenders. The jury unexpectedly showed pity on the parties to the swimming pool fiasco, declaring that all the pups could carry on to the next week's episode -- after sternly exhorting the dogs' owners that they were the ones who needed to shape up.

It's a Dog's Life

Hmm, a mint biscuit or a garlic cookie? There are some difficult culinary decisions facing pampered pooches in Germany. (20.11.2006)

Forget about Russian gas, German coal or controversial nuclear power plants. The energy source of the future is cheap and available everywhere on the streets of Berlin. You may have even had to scrape it off your shoes. (16.10.2006)