Germans Ring in New Year With Donations | Germany | News and in-depth reporting from Berlin and beyond | DW | 01.01.2005

Up to 600,000 Germans braved drizzle to party around Berlin's Brandenburg Gate and watch New Year's fireworks. Many of them sent text messages that raised money for the victims of Asia's tsunami disaster. 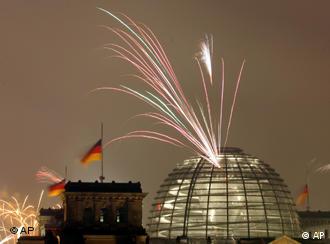 The party mood was darkened by Berlin Mayor Klaus Wowereit, who told the crowd at midnight: "Today we know that we can't celebrate a joyful New Year."

As a huge fireworks display lit up the skies over the German capital for 11 minutes, Berliners and their compatriots ignored an appeal by Foreign Minister Joschka Fischer to give money to the Asian relief fund instead of spending it on firecrackers, as the Germans are wont to do for New Year's celebrations.

Despite the sadness caused by the tsunamis that killed some 125,000 people in the Indian Ocean region, including at least 34 Germans, the bangs of firecrackers were matched by the pops of champagne corks. As in other European capitals, security was tight around the Brandenburg Gate with some 800 policemen and hundreds of firemen and paramedics, but no "notable incidents" were reported. 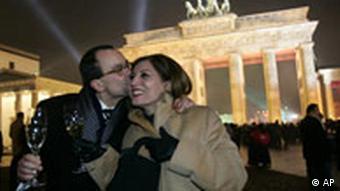 Christian and Simon Decher raise their glasses to celebrate the beginning of 2005 in front of the Brandenburg Gate in Berlin.

In a growing trend around Europe, people were being urged to use their mobile phones to make donations to the UN Children's Fund. By sending the word UNICEF to a special number displayed on giant video screens, €2.65 ($3.60) of the €2.99 fee would be sent to the emergency relief fund. By midnight at least €333,000 had been collected.

The Berlin celebrations at the Brandenburg Gate, which features a giant fairground including a big wheel, are the biggest in Germany.

In his New Year speech, Chancellor Gerhard Schröder warned the nation to brace for more bad news. "The terrible destruction means we must fear that several hundred Germans will be among the dead," he said in an advance copy of the speech. Schröder also said his government would push for Indian Ocean nations caught up in the devastation to receive debt relief from

Aid pledges for Asia's tsunami victims topped $1.1 billion Saturday on a tide of global New Year sympathy, but there was no respite for survivors holding mass burials as the death toll edged towards 126,000. (Jan. 1, 2005)

Chancellor Gerhard Schröder has used his annual New Year's speech to widen his appeal for debt reduction in the Indian Ocean countries devastated by Sunday's earthquake and tsunami. (Dec. 31, 2004)

Calls by politicians and aid organizations for Germans to donate the money they'd otherwise spend on fireworks to the tsunami victims has worried the companies that rely on New Year's revenue for their survival. (Dec. 31, 2004)