It's been called the 'vegetable of kings,' 'edible ivory,' or simply 'white gold.' It's white asparagus, and Germans have a veritable passion for the spring vegetable during its short growing season. 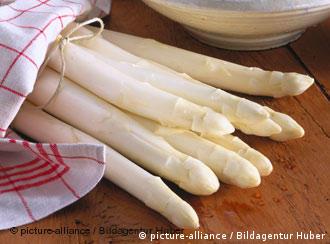 Germans are absolutely crazy about asparagus, known here as Spargel. Whereas other asparagus-eating nations like France, Italy and the United States prefer the green variety, in Germany it's white asparagus or nothing.

In fact, more white asparagus is eaten in Germany than anywhere else in the world, except Switzerland.

"It's a phenomenon; it's truly a cult product," said Hans Lehar, the head of the Fruit and Vegetables Cooperative (OGA) in Bruchsal, where a daily asparagus auction takes place.

White and green asparagus are essentially the same species, with the plant grown under different conditions. In order to achieve the pure white spears demanded by German consumers, certain varieties of asparagus are grown underground under piles of dirt called hillings. This way, the production of chlorophyll is inhibited and the spears don't turn green.

A question of quality 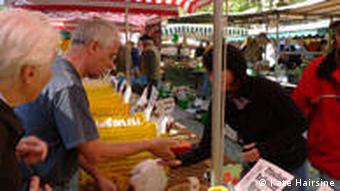 It has to be fresh and locally grown

"Class one asparagus is absolutely beautifully white with perfectly straight spears," said Lehar, pulling open a box of fresh asparagus being delivered ahead of the 1:00 auction. "The tips have to be tightly closed - another important criterion - and the cut should have a moist freshly-cut surface."

The asparagus season in Germany is short, running from mid-April to June 24. And the harvest is back-breaking work; the spears need to be gently freed from the surrounding dirt before being cut by hand.

As the growing and harvesting process is more time consuming and labor intensive, white asparagus is often more expensive than the green variety.

Traditionally, Germans aren't usually very fussy about the freshness and quality of their food. They want cheap produce and buy more than 90 percent of their fruit and vegetables at the supermarket. It's a running joke that in neighboring France, it's normal to see a tiny Fiat parked outside a gourmet food store, while in Germany, the parking lots of discount supermarkets like Aldi and Lidl are full of big Mercedes-Benzes.

In the case of white asparagus, though, it's a completely different story. Germans shell out big bucks for freshly-picked spears and purchase more than 50 percent of it directly from farmer's stands and market stalls.

Because they place such an emphasis on buying fresh asparagus, they also tend to buy what has been grown in their own region. 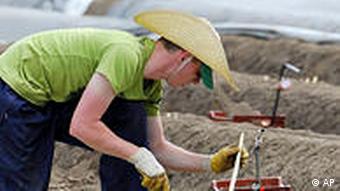 At the Saturday outdoor market in Karlsruhe in south-western Germany, most stalls offer local asparagus and nearly everyone seems to be sporting a shopping bag filled with kilos of the white vegetable.

"I just love the taste," said one woman when asked why she was prepared to pay so much for asparagus. "I love to think that it's spring time now, and there's sun and a new start to the year. I've known this vegetable since my childhood and this is also the region where it grows."

The history of asparagus in Germany is sparsely documented. Legend has it that the plant was introduced to Germany some 2,000 years ago by the Romans, who prized asparagus as a delicacy, an aphrodisiac and even as a contraceptive.

By the 1700s, it was being cultivated in monasteries and courtly gardens in Germany but paintings and drawings show it was grown above ground, which means Germans were eating green asparagus, not white.

The question of why white asparagus has become so popular in Germany is difficult to answer.

"It is a German tradition; I don't know why," said chef Thomas Sommer, whose restaurant Gasthof zum Bären in Bruchsal - like many others in asparagus-growing regions - offers a special asparagus menu during the season.

According to Sommer, he has many French friends who are always asking him why he eats the white variety.

"I always say it is better," laughed Sommer, taking a quick break in his busy kitchen. "It is softer, it's lighter, it's not as heavy as the green one." 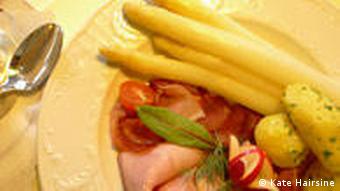 Unlike green asparagus, the white variety needs to be peeled before being cooked. In Germany, it is traditionally boiled and then served with a staggering variety of side-dishes, ranging from new potatoes and pancakes, to ham, Schnitzel or smoked salmon.

Up until the 20th century, though, asparagus was more prized for its medicinal qualities than culinary. Even today, it's renowned for its cleansing effects: It is a diuretic and produces extremely strong smelling urine, something that can put off those not used to the odor.

According to Sommer, this is part of the attraction.

"It cleans your insides, you smell it a little bit when you go to the toilet and you know in your mind, it is good for your body," he explained.

Southern Australia has the ideal combination for a prosperous wine industry: a good climate and an influx of German settlers with a winemaking tradition. Their children now export their wines back to Europe with success. (05.04.2010)