German Word of the Year 2015 is 'Flüchtlinge' - refugees

The Society for the German Language has revealed the word encompassing this year's politics the best: Without a doubt, the dominant issue in Germany was refugees. Discover the Words of the Year of the last seven years.

The Wiesbaden-based Society for the German Language (GfdS) has chosen the most important word of the year since 1977 - a word or expression that best reflects the political, economic and social mood in Germany in that particular year.

Amidst the crisis situation affecting Germany and the whole world, it's not surprising that "Flüchtlinge" (refugees) was chosen to represent 2015. 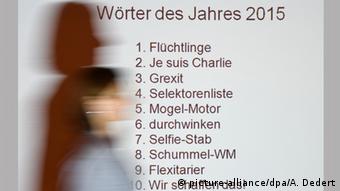 German Chancellor Angela Merkel's much-quoted slogan "Wir schaffen das!" (We can do it), in reference to the refugee crisis, was placed 10th among the 2015 wining words.

When in Vienna, do as the Berliners? Youth in Austria are increasingly adopting words and grammar practices from their neighbors in Germany, according to a new study: "Servus" is slowly giving way to "Tschüss." (04.12.2015)

They've been around for centuries and there's one for every situation. Proverbs are a central part of language. DW illustrated 14 of the most beloved German proverbs. How many do you know? (10.11.2015)

11 German words you need at the office

If you work in Germany, you'll need these 11 words. Yes, bureaucracy and beer both find their spot on the list. Even if you don't use German for work, see how your office life compares with these quirky business trends. (05.11.2015)