One million articles and counting. The German Wikipedia site is celebrating its landmark millionth article after more than eight years of operation. 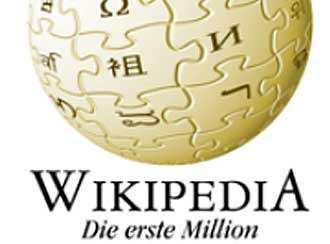 The German version of the free online encyclopedia Wikipedia passed a significant hurdle on Sunday as it observed its one millionth entry.

The landmark article was about the American botanist Ernie Wasson. Some in the Wikipedia community felt, however, that this topic was too insignificant and nominated it for deletion. If that should come to pass, then an article about German speed skater Robert Seifert would take the honor of being the site's one millionth article.

The first German Wikipedia article was written by biochemist Magnus Manske in May 2001. It described the so-called polymerase chain reaction, which duplicates DNA in a test tube.

The German site is expecting to reach its next milestone, its two millionth entry, sometime in 2015.

The German wiki, a collection of hyperlinked, publicly edited encyclopedic articles, is surpassed in size only by the English version, which has more than three million.

After German, the French Wikipedia page has the third most entries at more than 890,000, followed by the Polish and then Italian pages with 662,000 and 642,000 respectively.

Across all languages there are more than 13 million Wikipedia articles in more than 250 languages, according to the Wikimedia Foundation.

The online encyclopaedia Wikipedia is planning to follow the lead of its German arm and introduce a feature aimed at stamping out virtual vandalism on the English pages of its site. (27.08.2009)