The Spree Forest, a remote wetland south of Berlin, is a nature-lover's paradise known for its many narrow waterways. But researchers say the pristine region is in danger, blaming changes in climate and industry. 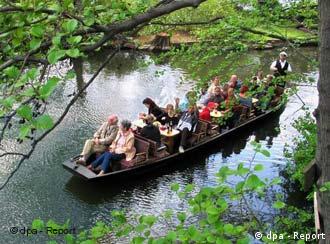 Gently down the stream: the Spree is popular with vacationers

The Spree River runs through the immense Spreewald Biosphere Reserve southeast of Berlin. It starts in the Lusatia region, near Poland, and is known for its traditional irrigation system consisting of 1,300 kilometers (800 miles) of small channels and waterways. Alder forests and wetlands alternate with sandy pine forests, grasslands and fields in a landscape that seems to have been little affected by the forces of modernity.

The Spree runs into the Havel, which becomes a feeder for the Elbe, eastern Germany's major waterway. While much of western Germany has been soaked with seemingly endless spring rains this year, folks in the Elbe valley have seen less precipitation. 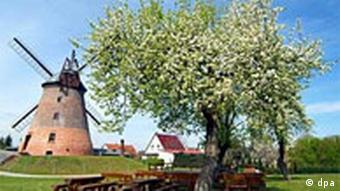 Given that Europe is facing climate change due to global warming, this trend is likely to continue in the coming decades, said Bernd Hansjürgens of the Leipzig-Halle Environmental Research Institute. Over the past 50 years, median temperatures in Europe have risen by as much as 1.5 degrees Celsius (34.7 degrees Fahrenheit), he said.

"We in the Elbe catchment area find ourselves in a relatively dry area within central Europe," he said. "This lack of rain is becoming more and more noticeable," he said.

To make matters worse, climate change is only part of the story. The structural changes in what was once a brown coal region also play a large part.

When the brown coal mines were working, between 1950 and 1990, it took six tons of water to unearth every ton of brown coal. That means that during that time, gallons upon gallons of water were taken from Lusatia and pumped into the Spree. Without this infusion, the water level in the Spree's aquifer would sink to somewhere between one-fifth and one-tenth of what it has been for the past 50 years.

The problem did not end with the closing of the mines. Now, the strip mines that are left need to be flooded with fresh river water. Otherwise, the groundwater that would gather there would be extremely sulfurous and contaminated with toxins. 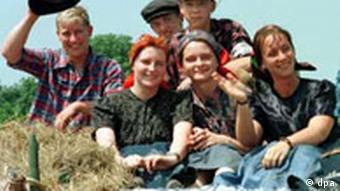 Ethnic culture along the Spree

In order to prepare part of the Spree Forest to survive without receiving water from Lusatia, environmental planners are trying to soften the blow.

There are a few options. First, planners may decide to flood the strip mines for a longer period of time. This would buy them time to deal with the changing situation -- but it would postpone the development of tourism in the region.

Another alternative would be to dry up of some of the Spree's small branch rivers, or Fliesse, and use that water to flood the strip mines. And a final possibility would be to bring water from the nearby Oder River into the Spree-Havel area. But the consequences such an action would have on all of the waterways must be researched in greater depth.

No one knows just yet what the best alternative is. But one thing appears certain: A part of the Spree Forest is destined to disappear.

A new study on the effects of global warming shows more than half of European plant species are at risk, especially Mediterranean and Alpine plants. (May 24, 2005)

Climate Change - What Comes After Kyoto?

After almost a decade, the Kyoto Protocol has finally gone into effect. The environment treaty now forces countries to reduce their greenhouse gas emissions that scientists agree are rapidly warming the earth’s temperature. Check out DW-WORLD's global warming dossier.

Berlin's river Spree was long slighted by the city's inhabitants, who saw it as little more than a murky cradle of industry. Now this jaded jewel is being dusted down and polished to a state-of-the-art sparkle. (July 24, 2005)