German train drivers are on strike - so what?

Trains will be standing still for six days, making this the longest railway strike in Germany. That sounds alarming, but DW's Volker Wagener finds the commotion in this labor dispute unnecessary. 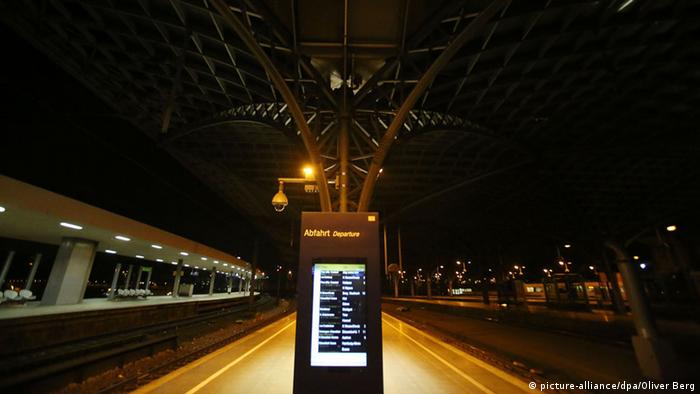 Honestly, don't we have anything better to do than complain about a little strike, which is, by the way, legal and legitimate? A union does not fight for the general public interest; it fights for its own interests. Moan as we might, I find it quite amusing that a couple of train drivers have shaken us up and even given us all the opportunity to use our dwindling improvisational skills. In a nation where everything is regulated in a pedantic and bureaucratic manner, a little railway strike comes across as anarchic. And that in itself has some entertainment value in an overregulated society.

Yes, the train drivers can!

But one thing after another. Considering how the tiny drivers' union can inflict strike damages of half a billion euros (who calculates that, anyway?) we ask are ourselves: Is it possible? Can they do it? Yes, they can! For a moment let's just ignore the fact that this is about the justified concern of a more or less poorly paid, minuscule occupational group, which, however, carries out an exclusive task. And let's put aside the question of why the train drivers' union simply does not want to join the larger railway union. An essential part of this labor dispute is the desire of the little train drivers' union to negotiate wage agreements on its own.

Beyond this very principled tussle lies the realization that being able to strike is a mark of a good democracy, which we relate to. Yet strikes are somehow un-German. They seem more Greek or Italian. The resonating undertone is telling us that this does not fit with the virtues this nation is known for, such as order, work ethic and consensus.

Yet the train drivers are striking for the eighth time since September 2014, even though Deutsche Bahn, Germany's national railway company, is offering them 4.7 percent more and an extra 1,000 euros. Still, it's not just about the money. It is about the independence of a dwarf-sized union, which is hijacking a whole nation for the interests of a few thousand members. Whoever speaks of chaos, of a transport catastrophe, on the platform in this situation should be told: It's all fine. Everything's going to be all right!

No panic on the platform

Employers are treating workers to free car parking spaces. Neighbors are talking to each other again and driving to the office together, the rental car industry is booming, as are the ride share companies and bus companies. Goods are getting off the rails and getting on waterways or streets - at least temporarily. What's left are traffic jams, delays and some canceled trips on discount weekend rates for senior citizens and their pets. That's all viable. While some companies are losing money because freight trains are stuck in rail depots, others are making money.

Strikes in Germany neither pose risks to businesses and industries, nor do they represent a violation of your, my and others' much vaunted rights in our mobile society. Strikes do not please anyone in this fast-paced society of doers, yet they do not justify the anxiety on the platform. In a country where one automobile is available to every second person, a strike does not paralyze the nation – neither personally nor economically. People should relax. Many of our basic rights were once the stuff of strikes. Dealing with this industrial action will be a piece of cake.

Comments have been closed for this opinion article.

Germany's business federations have strongly condemned a six-day strike for the hundreds of millions of euros they fear it will cost their members. The strike would be the longest in Deutsche Bahn's history. (04.05.2015)

The German engine drivers' union GDL has defended its weeklong strike, refusing to come to the negotiating table. Ministers have criticized the strike, which will inconvenience millions of commuters across Germany. (04.05.2015)

The GDL engine drivers' labor union has called a weeklong strike over wage and representation disputes with German railway operator Deutsche Bahn. The rail operator called the move "inappropriate and over the top." (03.05.2015)

Canada: Suspect charged with terrorism over attack on Muslim family 7h ago

Belarus parades 'hostage' Pratasevich before press yet again 8h ago