A German think tank has said that contrary to perception, relative poverty in Germany isn't on the rise. But it blamed unemployment for a general drop in living standards. 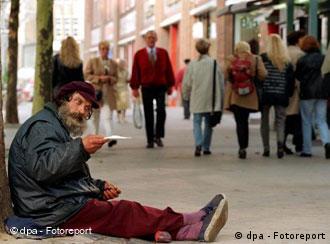 The standard of living has dropped in Germany

The Cologne Institute for the German Economy said 16 percent of the population in Europe's biggest economy was poor, earning less than 60 percent of the country's average net income of 938 euros ($1,127) per month.

The institute said the number of people living below the poverty line in 2004 was 3.7 percent higher than in 1999, which was the lowest level since the institute began keeping records for reunified Germany in 1991.

At the same time, the institute raised questions over German indicators for measuring poverty, saying they were substantially flawed.

The "typically poor person" today has 6 percent more real income than five years ago, said Michael Hüther, head of the think tank, on Monday. The theory that the poor were getting poorer was wrong, he added. 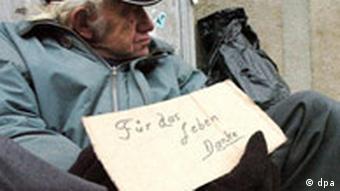 According to German standards, people are considered poor if they earn less than 60 percent of average monthly wages. At the moment this would be about 600 euros per month.

Rolf Kroker, also of the Cologne Institute for the German Economy, argued that this could mean that the number of people considered poor could indeed rise, although society as a whole was getting richer.

"It could happen that all incomes increase, all people are better off, and we cannot see a reduction in poverty. Poverty could even increase if the higher incomes improve faster than the lower incomes," Koker said.

He explained that this was exactly what happened over the past seven years. According to a government report, poverty increased from 12.1 percent in 1998 to 13.5 percent in 2003. At the same time Germany's wealthiest 10 percent increased their share of income substantially.

In spite of the public outcry that this report has caused, Kroker said Germans are still faring very well compared with their European Union neighbors, especially in the poverty-prone sectors of the population.

"We are quite good because poverty among younger people is below average, and also among elderly people poverty is far below the average."

The institute singled out unemployment as the main reason for the drop in living standards, in particular long-term unemployment which afflicts 3.5 percent of the country's eligible work force. 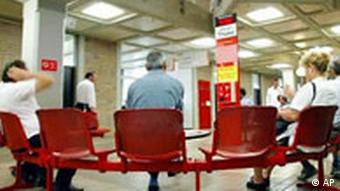 Waiting for work at a Munich job center

The number of unemployed in Germany rose back above 5 million in February, equivalent to a rate of 12.2 percent, dampening hopes of a long-awaited labor market upswing.

The institute said being joblessness had a far more negative impact on people's lives than a mere lack of money. The long-term jobless perceived their lives as less satisfying than those who had jobs but lived below the poverty line, and the longer they remained out of the work, the smaller their chances of finding a new job became.

"Even those who are unemployed but whose income is above the poverty line are less satisfied with their lives than the working poor," the institute said.

"Far more alarming than the increase in relative poverty in Germany is the fact that 3.5 percent of the workforce has been unemployed for more than 24 months," it added. It is on this front that the fight against poverty should be waged."

Kroker said the group of long-term unemployed is disproportionately higher in Germany than in other European countries, making job creation absolutely essential in the fight against poverty.

Chancellor Angela Merkel is planning to introduce a national minimum wage to stem the growing tide of the so-called working poor who do not earn living wages in their jobs as well as consider state-sponsored wage subsidies.

But the measures, according to Koker, will do little to alleviate the situation.

"We don't think this is a good way, and in connection with fighting poverty, the wrong instrument. If we want to reduce poverty we need to have more economic growth and more employment," Koker said.

"To some extent we also need to reduce welfare benefits as a way to increase the incentives to take up work and so reduce poverty in the long run."

Child Poverty in Affluent Germany on the Rise

Welfare groups fear that the number of poor children will continue to rise as the correlation between poverty as a child and missing out on a proper education is stronger in Germany than in many other places in the West. (Dec. 31, 2005)

After hearing about the poverty-stricken victims of harsh social and labor market reforms in Germany, volunteers from a Kenyan hospital are flying in aid in the form of tea and coffee to help ease the suffering. (March 6, 2006)

The German government is giving some serious thought to introducing a minimum wage to counter dipping salaries. But agreeing on the amount is proving tricky. (March 4, 2006)