German Team Risks Going Cuckoo With Wacky Watch Training | News and current affairs from Germany and around the world | DW | 22.05.2006

They certainly broke the mold after they made Jürgen Klinsmann. The German coach has introduced a number of strange ideas while training the national soccer team but none can rival getting his stars to repair watches. 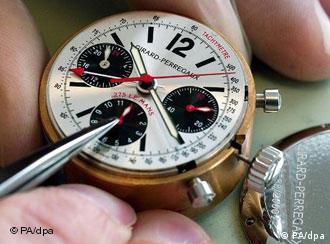 Wacky training exercises rate alongside homeopathic healing and astrological wall charts in the list of practices most likely to give your fan base the feeling of impending doom before a major tournament. Spare a thought, then, for Germany supporters who must be wondering if their soccer team are about to suffer due to Jürgen Klinsmann's alternative methods.

Germany's World Cup squad will take a course in watch making to fill up a bit of spare time during their Swiss training camp, according to team manager Oliver Bierhoff. "They'll learn how to take a watch apart and put it back together again," he said after the squad arrived in Switzerland on Sunday after a break in Sardinia. "It's something a bit different."

"It must be a great feeling when you get all the bits back together and you hear it ticking." 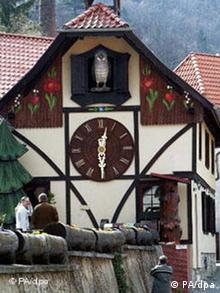 While the exercise may ensure that Germany's players make the kick-off on time, the bizarre training sessions may prove too much for young men who are more likely to spend their time buying expensive time pieces than taking them apart and rebuilding them.

Given Switzerland's time-keeping tradition and the country's fame for producing a certain type of clock, fans will be hoping that the weird techniques won't make the players go cuckoo before the World Cup starts on June 9.

A selection of the best in wacky and offbeat stories from around Germany.

Klinsmann Gets Merkel's Vote of Confidence

Under-fire Germany manager Jürgen Klinsmann received a vote of confidence from an unlikely quarter when Chancellor Angela Merkel told him Wednesday she was rooting for him. (March 16, 2006)

Klinsmann: How to Reform a German Tradition

In a DW-WORLD interview, the national coach talks about US sports techniques, marketing and how he is trying to reform the German soccer tradition in the run-up to World Cup 2006. (Nov. 13, 2004)