A 57-year-old man has gone on trial in Germany on charges of poisoning food brought in by his co-workers in a metal fittings company. Prosecutors have said he was caught on tape lacing a sandwich with lead acetate. 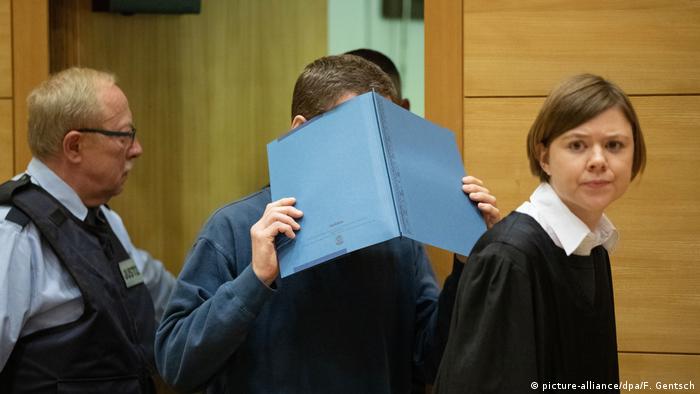 German authorities did not release the suspect's full name, in accordance with Germany's privacy laws

A German court opened a trial against a man accused of poisoning his co-workers with heavy metals on Thursday. The man is suspected of attempted murder in at least three cases.

Klaus O. appeared in the courtroom in the northwestern city of Bielefeld but did not enter a plea.

The accused had worked for metal fittings company ARI Armaturen for 38 years in the nearby town of Schloss Holte-Stuckenbrock. His manager has described him as "conspicuously inconspicuous," with other colleagues also saying the man was isolated and often wore headphones.

One of his alleged victims told the Bild mass-circulation newspaper that he worked closely with the suspect for 30 years.

"He always kept to himself, did not speak and had no friends," the co-worker said. "I had no problem with Klaus, and I accepted that he does not want any contact. There was never an argument."

The suspect was detained by police in May after another co-worker found highly poisonous lead acetate on his food. The intended victim first assumed that the white powder on his sandwich was some sort of dirt, but he grew more suspicious after the powder appeared again on his lunch the next day. Eventually, he alerted the company management, which secretly installed a camera and recorded the accused man tampering with the food.

Police later searched the 57-year-old's home and found a makeshift laboratory, in which he apparently mixed poisonous substances, including lead, mercury and cadmium.

Initially, authorities said that they were looking into 21 deaths in the ARI Armaturen company for possible links with the heavy metal poisoning.

The trial that started on Thursday, however, involves only three victims of attempted murder, including a 29-year-old co-worker who is in a coma due to severe brain damage and two others who suffered serious harm to their kidneys.

Klaus O. chose to remain silent after his arrest and made no comments on the motive.

The trial is set to continue on November 26.