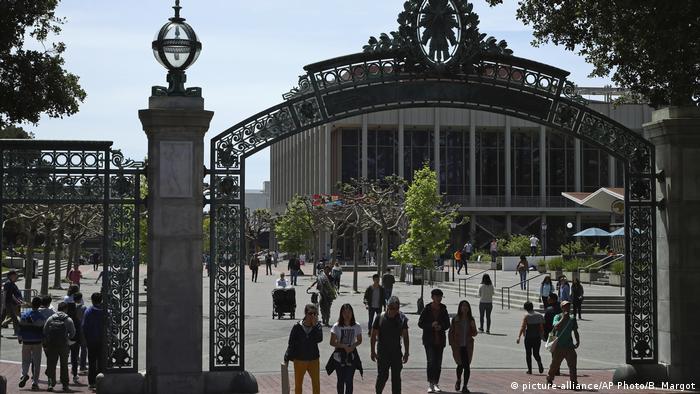 German students studying abroad in the United States urged the German government to take a stand against new US visa rules that could see them deported when their universities and colleges resume classes in the fall.

"We're counting on your support," the letter read, slamming the new visa regulations as part of "an increasingly xenophobic immigration policy." They called on the German government to "resolutely oppose the latest visa regulations … in the interests of the European and international student body in the USA."

In response, the German Foreign Ministry released a statement that noted the rule change and acknowledged the prerogative of countries to "take appropriate measures according to their particular situation" during the pandemic, news agency dpa reported.

An 'attack' on international students

Under the new rules announced by the US Immigration and Customs Enforcement (ICE) agency, international students would no longer be allowed to remain in the country if their schools offer online-only classes during the upcoming fall semester.

They would be allowed to stay, but only if they transferred schools to ones offering "in-person instruction" or by reducing their course load or applying for medical leave.

Maximilian Klein, a masters student at Harvard University and one of the letter's signatories, said that the new rules are trying to force universities to hold classes in person, despite the health risks posed by the coronavirus pandemic.

"We also see this as a momentous attack on international academic exchange and knowledge transfer as well as on the freedom of teaching and research," he wrote on Twitter.

The students who signed the letter also worried that the threat of deportation or the possibility of trying to complete their US degree while based back in Germany "could have wide-ranging financial and psychological impacts for those affected."

There are an estimated one million international students studying in the US, with over 9,100 of them coming from Germany, according to the 2019 Open Doors Report on International Educational Exchange.

On Saturday, Johns Hopkins University sued the US President Donald Trump's administration over the rule change, the Baltimore Sun reported.

Johns Hopkins, which has around 5,000 international students currently enrolled, joined a growing group of universities pushing back against the regulations. Harvard University and the Massachusetts Institute of Technology (MIT) also filed a lawsuit to block authorities from enforcing the rule.

Western universities are expecting a massive drop in international student enrollment due to the pandemic. Germany's zero tuition fees, top health care system and coronavirus response could help it weather the storm. (02.07.2020)

Ahead of this weekend's Super Bowl, the NFL has announced that the cities of Munich and Frankfurt will host two regular season games each over the next four years. The move comes 15 years after the end of the NFL Europe.

US election: How Donald Trump has changed global foreign policy 24.10.2020