A head teacher in southern Germany has caused social media outrage by banning revealing clothing such as hotpants at her school. Dress code questions have rattled German schools several times in recent weeks. 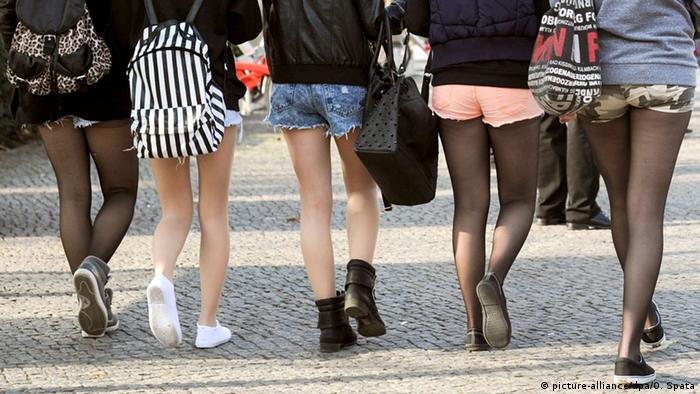 It's hot in Germany - this past weekend, meterologists recorded the highest temperatures ever, in fact - and school's not out for summer in all states yet. This has led to a kerfuffle in a number of different schools about what students, and girls in particular, are allowed to wear to class.

One rule has even made it to the Trending Topics list on Twitter: wearing hotpants is forbidden. In German, there's a tag for it: #hotpantsverbot - or "hotpants ban."

The rule against very short shorts took effect at a high school in the small southern German town of Horb-Altheim. Head teacher Bianca Brissaud explained it in a letter to parents.

"In recent times, we have frequently been forced to conclude that girls at school are dressed provocatively," she wrote, according to the local newspaper "Schwarzwälder Bote." Brissaud told the paper that she herself didn't think students' clothing was a pressing issue, but that some male and female teachers had urged her to act.

"Those who dress too provocatively (for example, midriff-revealing shirts or hotpants) will be given a large t-shirt by the school that they will have to wear until the end of the school day," the letter specifies.

While this might sound familiar to many (former) students of US high schools, dress codes are the exception, not the rule, at German schools. The reason this has sparked an outrage on social media is the fact that only girls' clothing is mentioned in the letter. There was no word on whether boys are still allowed to wear muscle shirts, for example. Twitter users like Effy are saying instead of prohibiting a piece of clothing, parents should teach their sons to not view girls as sex objects.

"Some of my male colleagues didn't know how to broach the subject with female students," Brissaud said. The solution of outlawing hotpants and handing out large t-shirts is only temporary. After the summer, the letter states, the school will work with students and parents to come up with an official dress code.

But that's not necessarily a fix-all, either, as a school in the same southern German state had to learn. The Deutschhaus high school in Würzburg published a dress code that went into effect on May 1. Parents had demanded it and teachers and students came up with the rules together. Hotpants are still allowed. See-through blouses are not, and neither are t-shirts with sexist or racist slogans or drug-related prints.

Some students staged protests, but the majority were ok with the new situation, the "Süddeutsche Zeitung" newspaper reported. "It's about dressing appropriately and not revealing too much of yourself," Tabea, a 15-year-old student, told the daily. Twitter user Jella suggested a simple solution: introducing school uniforms.

Uniforms might also have prevented the unwanted notoriety another school in southern Germany experienced in June.

Critics accused head teacher Martin Thalhammer of imposing Islamic standards of behavior on his students after he sent a letter to parents informing them about the refugees that were to be housed in the school gym.

"Because our school is in the immediate vicinity, restrained clothing should be worn to avoid confrontations" with the mostly young, male, Muslim asylum-seekers, he wrote.

"See-through tops or blouses, short-shorts or miniskirts could lead to misunderstandings," the letter stated.

It went on to tell students not to stare at the asylum-seekers or take photos of them, and warned that "derogatory or racist statements will not be accepted in any way."

When conservative German websites caught wind of the letter, they described it as "Sharia school rules," referencing Islamic law.

Thalhammer told the "Süddeutsche Zeitung" that all he wanted to do was sensitize students to the fact that two different cultures were about to meet at his school.

In a few months, the issue of hotpants, miniskirts and what constitutes appropriate school clothing won't be a problem anymore. Come fall, it'll simply be too cold for shorts.