German rocker Lindenberg honored for dedication to the German language

After more than 40 years as a major presence in German pop/rock, Udo Lindenberg’s career took a step in a surprisingly different direction after he scooped the prestigious Jacob Grimm language prize. 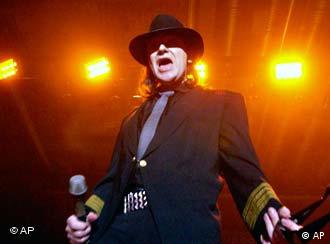 Lindenberg wowed the jury with his creative lyrics

The prize, given annually since 2001, is one of the country's most highly-respected awards for work with the German language, but has more often than not landed in the hands of serious literary giants such as Cornelia Funke and Paul Kirchhof. This year is the first time in the award's ten year history that it has been given to a rock musician.

During the presentation ceremony at the guildhall in Kassel, central Germany, journalist and publicist Matthias Matussek praised Lindenberg and said his song lyrics proved he had learned much about the German language.

The jury, in naming Lindenberg as this year's winner, concluded that he was the "most influential and successful German rock musician of the last 40 years" and, in that time, had more than proven that music in German could be successful internationally, the Rheinische Post reported on Sunday.

Lindenburg, who first entered the business in the late 60s as a drummer and went on to have hits with "Sonderzug nach Pankow" (Special train to Pankow), "Airport" and "Geh nicht weg" (Don't go away), said that the jury's decision was "cool."

Jacob Grimm, after whom the award is named, was one half of Germany's famous Grimm Brothers, who rose to prominence in the early 1800s for their collection of now world-famous fairytales. The prize which bears Jacob's name is awarded to someone who works to promote the “recognition, further development and support of German as a cultural language.”

Germany's diverse music scene has room for everyone

Contemporary music, classical, jazz or pop -- Germany’s music scene has something for everyone. Big festivals attract international artists, and German conservatories draw students from around the world. (05.02.2009)

The truth about Germany: Fairy tales