German Reunification Model not for Seoul | Germany| News and in-depth reporting from Berlin and beyond | DW | 11.04.2005

German Reunification Model not for Seoul 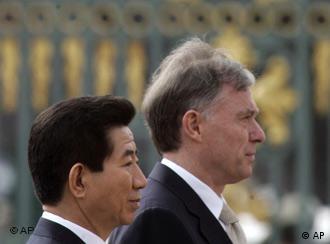 Last year the total export volume between Seoul and Berlin reached an all-time high at $16.8 billion (13 billion euros). For South Korea, Germany remains the biggest trading partner within the European Union, for Germany, Seoul is the third-largest in Asia.

But, it's not just excellent business relations that bind the two countries. They also share a much deeper link through their common experience of what it meant to be a politically and militarily divided country. The difference is that while Germany was reunited in 1989, a border still divides communist North Korea and the industrial nation of South Korea ever since the Korean war of 1950-1953.

As South Korean President Roh Moo-Hyun arrives in Germany on Sunday for a five-day trip, reunification is expected to find mention in political talks between the two sides. At the same time, experts say that Germany, which was once seen as a great model in South Korea, has lost some of its shine.

"South Korea has finally drawn conclusions from German reunification: one cannot pull it off so quickly and in such a chaotic manner," said Kay Möller of the Foundation for Science and Politics (SWP) in Berlin. "South Korea has drawn its lesson: ' if we do the same thing, we'll be ruined economically'," Möller added.

Patrick Köller of the Institute for Asian Studies (IFA) in Hamburg agrees that the Seoul-Berlin relationship has sobered up. "The euphoria in South Korea over its own reunification has sharply evaporated," said Köller. "That's because of the economic factor."

Germany is still struggling with the astronomic costs of absorbing five poor states of the former Communist East Germany and injects billions yearly in them to improve infrastructure and bring them up to the standards of western states.

When asked in an interview with German daily Frankfurter Allgemeine Zeitung whether Germany's reunification seemed exemplary or instead daunting, Roh said diplomatically, "The Korean peninsula needs a slower and longer process."

Instead, Roh is using the five-day trip to advertise his country under the "Korea Year 2005" in Germany. As part of the program, South Korea will play host at this year's Asia Pacific Week in Berlin in September. A further highlight will be South Korea's pivotal role at this year's prestigious Frankfurt Book Fair in October.

Experts however don't expect anything concrete on the matter of the ongoing stand-off over North Korea's nuclear ambitions, other than Berlin stressing the importance of six-party talks and Pyongyang's renouncement of its nuclear program.

"The EU has failed on the subject and Germany is hardly in a position to exert influence," Möller said. He added that of the five countries negotiation with North Korea -- China, Japan, Russia, South Korea and the US -- none was interested in involving the EU.

Instead, Roh is trying to find international support for reviving his own policy of détente between Pyongyang and Seoul. Experts say that though the US remains South Korea's most important ally in the nuclear stand-off with North Korea, the US insistence on a swift reversal of Pyongyang's uranium and plutonium program and UN sanctions against the country if necessary, isn't widely shared in South Korea.

Seoul instead wants to apply less pressure on Pyongyang and instead offer it incentives for gradually dismantling its nuclear program. It has also spoken out in favor of lifting existing US sanctions on its northern neighbor.

Roh will hope to find allies for his policy towards North Korea in Germany.

With the opening of its reading room in Pyongyang, Germany’s Goethe Institute has become the first Western cultural organization to open shop in North Korea. Institute leaders believe they can operate free of censorship. (June 3, 2004)

Germany is known as an exporter of cars, precision machinery and beer. Now, one school is forging a path toward a new export: the country's impressive classical music legacy. (March 10, 2005)