German Publisher Releases Study of Own Nazi Past | Germany | News and in-depth reporting from Berlin and beyond | DW | 17.03.2009

German Publisher Releases Study of Own Nazi Past

The DuMont Media Group in Cologne has become the first newspaper consortium to publish a historical account of its own activities in the Third Reich. The work is a portrait of a dark age for freedom of the press. 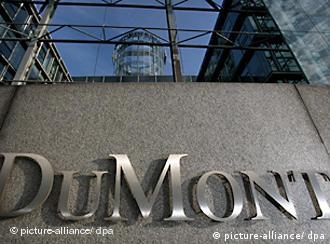 DuMont is one of Germany's biggest newspaper companies

The study was written by historian Manfred Pohl and entitled M. DuMont Schauberg: A Newspaper Publisher's Fight for Independence Under the Nazi Dictatorship.

Commissioned by Dumont itself, the study was officially launched in Berlin on Monday, March 16.

The book focuses on the then head of the family-owned publishing company, Kurt Neven DuMont. The author Pohl concludes that DuMont, although a Nazi Party member as of 1937, did not actively support Hitler's regime and indeed tried to help employees threatened by Nazi oppression.

'From citizenry to obedience'

But Pohl also found that DuMont-run newspapers were gradually co-opted as the Third Reich established itself.

"The Koelner Zeitung [Cologne Newspaper] contributed, not insignificantly if also involuntarily, to the transition from a culture of active citizenry to one of obedience," Pohl wrote, adding that Neven Dumont himself "subordinated his own liberal spirit step by step to the system."

The publishing group said it welcomed the historian's findings. 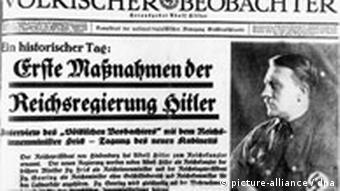 "We thank Professor Pohl and his collaborators," Dumont said in an official statement. "This work provides a broad and comprehensive picture of the past -- without it much would have been either forgotten or become subject to speculation."

In 2006, the German news magazine Der Spiegel published a report saying that Neven Dumont had profited from the Nazi Aryanization of Jewish property. It was later forced to retract that report as inaccurate.

The Dumont group, whose holdings include a number of prominent papers in western Germany and stake in the Israeli daily Haaretz, was recently involved in a high-profile takeover of leading newspapers in Hamburg and Berlin.

The history of the Dumont Group under Hitler was fairly typical for the Third Reich.

When they came to power in 1933, the Nazis did not nationalize all of Germany's newspapers. But they did put pressure on publishers critical of Hitler's aims, in some cases forcing them to sell their publications to buyers more amenable to the Nazi world-view.

Furthermore, the Editors Law of October 4, 1933 required newspaper to omit any material "calculated to weaken the strength of the Reich abroad or at home."

This intentionally vague directive essentially made publishers responsible for censoring their publications and ensuring they did not print information or opinions critical of the Nazi government.

In Dumont's case, historian Pohl wrote, the firm faced a concrete threat of being taken over by a pro-Nazi rival.

Nonetheless, Pohl concluded, Dumont did his best to maintain an "inner freedom" within the company, while ensuring an external appearance of conformity.

US Critic Slams New Cruise Film as Soft on Nazism

An influential US critic on Friday blasted Tom Cruise's latest movie Valkyrie as a "Nazi apologia" in the sharpest criticism yet of the World War Two thriller. Reviews of the film overall have been mixed. (27.12.2008)

The German publisher Alfred Neven DuMont has capped his longstanding personal ties to Israel with a business deal, buying up a one-quarter stake in the major Israeli publishing group, Haaretz. (14.08.2006)