German privacy specialists are concerned about the practices of online social networks and recommend against revealing too much about yourself. Private information should only be divulged cautiously, they say. 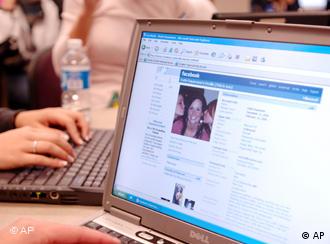 Staying in contact with friends, swapping photos, or even making new business contacts - these are all stock- in-trade for Web 2.0 social networks. There are now various platforms oriented toward helping users make contact with one another.

But there are drawbacks and potential dangers linked to sites such as Facebook and Xing, according to German privacy specialists.

"The big problem with social networks is that you don't know just who can poke around in there," says Henry Krasemann, an expert at the Independent Centre for Data Protection for Schleswig-Holstein in Kiel, Germany. That means that employers can potentially also access the data. That's why data protection specialists recommend storing as little private information as possible online.

"Under no circumstances should you be putting bikini or party photos up onto a network of that kind," says Constanze Kurz, spokeswoman for the Chaos Computer Club (CCC) in Berlin.

Other threats can come through the websites' general terms and conditions. The German networks meinVZ and SchuelerVZ recently raised eyebrows with their unusually intrusive demands. Users had to agree to personalized advertising to retain access. These terms have been adjusted in the interim, confirms studiVZ spokesman Dirk Hensen.

"If users don't want that kind of advertising, they can opt to receive standard advertisements and the account used as before," Hensen says. This is not the only important setting that is not by default geared toward increased privacy, such as standard settings on who may view a user's profile.

Another problem for social networks is identity grabbing: somebody logs in using another user's data and then makes direct changes to the profile. One way to fight that is choosing a non-obvious password, meaning no birthdays or children's names. Even so, many of the sites are freely accessible through search engines:

"All user data for studiVZ are already published on the net. You don't even need to hack it to crack into the system," says Hensen.

Another issue to consider is the international nature of many of the social networking sites. Facebook, for example, is one of the leading social communities on the web. Yet while users from Germany have the option of using a version of the web site localized into German, the company does not have a German branch office.

That means that it follows the law of the U.S. state of Delaware -- and as such is subject to much less stringent data protection laws than those in Germany.