French President Jacques Chirac's assertion that France would use nuclear weapons against any state that carried out a terrorist attack against it has met with criticism in Germany. 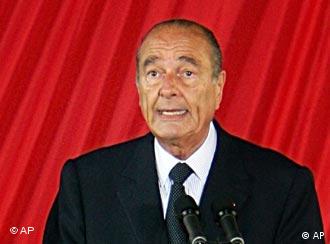 Chirac's statements have raised a flurry of protest in Berlin

Chirac's threat of a nuclear response to any terrorist attack on his country prompted widespread criticism in diplomatic circles in Berlin.

The Christian Democrats (CDU) distanced themselves from Chirac's statements. CDU foreign policy expert Andreas Schockenhoff, referring to the international community's ongoing efforts to prevent countries such as Iran from developing nuclear weapons, suggested that Chirac was not being helpful.

"We have to convince these countries that their situation isn't going to get any better if they possess nuclear weapons," Schockenhoff told Reuters in Berlin. "I don't think Chirac's approach is really the best way to lead this debate and to increase pressure on Iran."

"This is a unilateral declaration on the part of the French president, and it's something he ought to have discussed with his European partners first," Weisskirchen said. 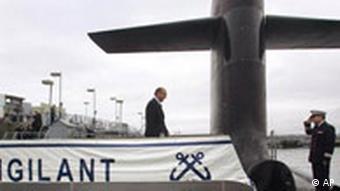 Chirac on Thursday raised the threat of a nuclear strike on any state that launches terrorist attacks against France.

"Leaders of any state that uses terrorist means against us, as well as any that may be envisaging -- in one way or another -- using weapons of mass destruction, must understand that they would be exposing themselves to a firm and appropriate response on our behalf," he said.

"That response could be conventional, it could also be of another nature," Chirac said in a clear reference to nuclear weapons during a visit to a French nuclear base in the northwestern region of Brittany.

"I don't think that anyone -- and certainly not peace or de-escalation -- is served when one trumpets to the world community employing nuclear weapons as an option," said Westerwelle, who leads the biggest opposition party in the Bundestag.

"The federal government must insist that our French allies take back this statement," Nachtwei told the Netzeitung.

There was no comment from the German government on Chirac's remarks on Thursday.

"I'm certain that this will not make the world a safer place," Trittin told Spiegel Online.

The "gas war" between Russia and Ukraine has fueled a heated debate in Germany about the country's energy policy, but Chancellor Angela Merkel reaffirmed her government's commitment to the nuclear phase-out. (Jan. 5, 2006)

Germany Pressures US Over Nuke Removal

Germany is using a meeting to review the effectiveness of the nuclear Non-Proliferation Treaty on Monday to urge the United States to remove its nuclear missiles from German soil. (May 2, 2005)

Europe sought Tuesday to keep up pressure on Iran over its nuclear program, dismissing as vacuous a Tehran offer to resume talks and seeking to overcome Russian and Chinese opposition to UN action. (Jan. 17, 2006)