German Politicians Cozy Up to the Arts | Culture| Arts, music and lifestyle reporting from Germany | DW | 16.08.2005

Politicians have always been keen to ingratiate themselves with the arts and culture community. But are their gestures of support mere posturing -- or will they translate into constructive policies? 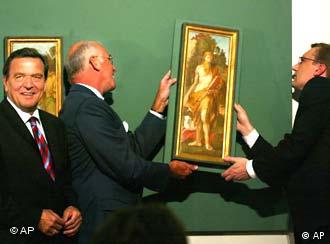 The chancellor and art -- just a good photo opportunity?

The election campaign might be gathering momentum, but Chancellor Gerhard Schröder still had time to host a book launch in early August. "Art in the Chancellery," an illustrated volume about the work adorning Germany's center of power, is the sort of glossy tome one might find on a coffee table. It attests to the government's sophisticated taste in art and boosts Schröder's reputation as a leader with a healthy appreciation of art's contribution to society.

Schröder is well aware that this kind of event is a perfect photo opportunity -- a chance to showcase German artists and portray the SPD as the party of poets and philosophers. And he hopes they'll return the favor. 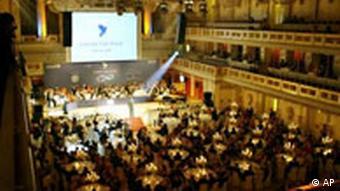 But the opposition conservatives take the chancellor's demonstrative appreciation of the arts with a pinch of salt.

"I don't think images of the chancellor with artists and writers say anything about how cultivated he is," said Günter Nooke, CDU Spokesman for cultural affairs. "Politicians from the CDU and CSU know more about the arts, but they don't have to show off the fact, because it's just a part of everyday life for them."

But the governing SPD has gone a step further, and says it wants to appoint an official federal ministry for cultural affairs.

"We have a basic weakness that, for instance, within the EU the arts have no single representative," said Monika Griefahn, an SPD parliamentarian. "Instead, we have a federal cultural affairs commissioner as well as state representatives. We want the arts to have a stronger voice."

But Gundula Reinig from the Renaissance-Theater Berlin has reservations about the idea of centralizing cultural policy.

"Germany's cultural system is based on the idea of federalism," she said. "That makes it the most substantial and, spread over the network of the Federal Republic of Germany, the most extensive model for theater production in the world. It's an established and unique system. And if a ministerial post turns this federal system into a centralized one, I think that's very dangerous for Germany's cultural landscape."

It's a view shared by much of the country's arts establishment. Any politician wanting to tamper with the existing subsidy system after the elections and manage the arts from Berlin would inevitably face stiff opposition from many artists and from Germany's federal states. 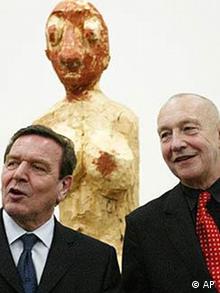 Chancellor Gerhard Schröder, in the Bundeskunsthalle in Bonn in front of the sculpture "Greetings from Oslo" by the artist Georg Baselitz, right.

In general, most of the artists themselves view the politicking with skepticism. Politicians rediscovering their love for the arts during an election campaign makes them suspicious.

"In the current election campaign, the parties are looking for niches where they can still mobilize potential voters," Reinig said. "We know turnout will be very low, so of course they're looking everywhere they can. But paying lip service isn't enough for me. We should be talking about translating words into action."

Take German cinema. It doesn't often excite much interest abroad, and that's why the conservatives say they want to subsidize more big productions from the German capital in the future.

At present, regional film and theater projects are the main beneficiaries of subsidies paid for by German taxes. The SPD says redistribution favoring larger and more expensive productions in Berlin would leave many smaller projects without funding.

"It makes me a bit worried that only mainstream productions would qualify," Griefahn said. "In other words, the operas, plays and films that attract large audiences would continue to get publicity, because they can almost support themselves, or at least attract sponsoring."

Either way, Germany's film industry, theaters and art community certainly have a vested interest in the outcome of the upcoming election.

While Berlin was cut off from the rest of West Germany during the Cold War, Bonn was the German capital. As a result of its standing, and rich history, Bonn is a city brimming with culture. (Aug. 10, 2005)

In 1990, the EU launched the MEDIA program to provide support for European films, in danger of being driven to extinction by Hollywood. Fifteen years later, movie houses in Europe are still fighting for survival. (July 14, 2005)

Berlin's three opera houses are no strangers to eluding closure and nursing the wounds of financial incision. Although they are currently on safe ground, they're having to learn to sing for their supper in unison. (Nov. 25, 2004)