Local police raided several British military installations in Germany on Tuesday. They suspect that military personnel have been accepting kick-backs from contractors for work done on the bases. 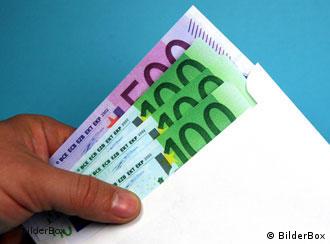 Prosecutors in Wuppertal said that around 200 police officers and 50 officials searched British army premises in the towns of Moenchengladbach, Elmpt, Paderborn and Herford. Eight local companies were also examined.

German authorities suspect that some 21 civilian British military employees may have taken bribe money in return for contracts for work such as renovating and supplying army buildings.

A statement from the Wuppertal prosecutors' office said that payments may have also been made to non-existent shell companies for fake contracts, "costing the British government millions of euros."

The statement said British authorities were cooperating fully with German investigators, and that British military police had assisted with the raids.

The British military itself did not issue an immediate statement on the raids.

The German unit of Airbus has admitted to having secretly compared employees' bank account numbers with those of suppliers in what it said was a bid to fight corruption. (02.04.2009)

A million dollars have been collected in a Kenyan fundraising effort to compensate the families of more than 200 people who lost their lives in two fire incidents. Corruption has been blamed for the deaths. (22.02.2009)

The surveillance scandal surrounding Germany's Deutsche Bahn rail company keeps on growing. A new report says the firm repeatedly spied on nearly all its employees over the course of eight years. (10.02.2009)

The EU has increased the scope of its sanctions against Russia while thousands flee besieged cities along humanitarian corridors. Follow DW for the latest.