Police raided brothels across Germany on Tuesday, following a lengthy investigation into what they believe is an extensive European network of human smugglers, pimps and money launderers. 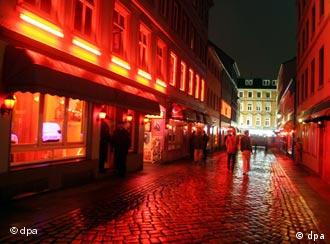 German police raided about 600 brothels in 13 states Tuesday night in an effort to crack down on human trafficking from West Africa.

The Federal Criminal Police Office said Wednesday that it was interviewing more than 100 women from different West African countries who were forced to work as prostitutes, some of them minors.

Tuesday's raids follow an investigation of several years into what police believe is a wide-ranging network of human smugglers, pimps and money launderers. The women, lured to Europe with promises of a better life, were often up to 70,000 euros ($98,000) in debt to the human traffickers.

"Only if we manage to win the trust of victims and persuade them to cooperate with the authorities can we break the cycle of repression, intimidation and dependency," said Federal Police Chief Joerg Ziercke in Wiesbaden.

Authorities have so far learned that the network, involved in prostitution, human trafficking, and document forgery, among other illegal activities, is likely active in Germany and other European countries.

A new twist to marketing the world's oldest profession is putting sex workers in harm's way, according to some concerned citizens and women's rights activists. (10.07.2009)