Angry members of the public shouted in a German court Monday, Dec. 8 as two policemen were acquitted of the 2005 death of a handcuffed Sierra Leonean in a police cell. 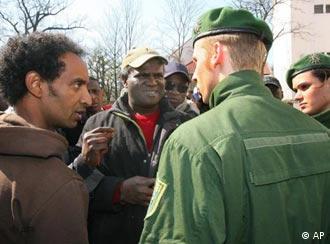 Oury Jalloh, 23, was killed by the fire when his mattress caught fire in the cell in Rosslau, 100 kilometers south-west of Berlin.

Police contended he was drunk and violent, and set alight to his bedding while using his cigarette lighter, which he had concealed.

The state court ruled that it could not be proved the two police officers on watch bore any blame for his death in January 7, 2005.

The 22-month trial near Dessau, in a part of former East Germany where several ugly racist incidents have occurred in the past, has attracted attention from rights groups outside Germany, with an Oury Jalloh Memorial Committee set up to press charges.

Critics alleging police racism contended that Jalloh, who was an applicant for German political asylum, could not have lit the fire while wearing handcuffs and leg-irons. At the verdict, some stood up and shouted their disapproval.

The presiding judge, Manfred Steinhoff, was unable to explain the verdict because of the interruption, and called police to remove the protesters.

Lawyer Regina Goetz, representing Jalloh's mother, accused the police of a cover-up "with so many concealments and blunders that the truth can never be discovered."

Jalloh had earlier been charged with molesting women and resisting police on duty.

But the public prosecutor said before the verdict that the main officer on watch could only be accused of manslaughter by negligence, while no wrongdoing could be proved against his assistant.

Prosecutor Christian Preissner said the senior officer should have reacted to a smoke alarm and immediately taken a fire-extinguisher to Jalloh's cell. Pathologists said he died of heat shock from the fire.

Two German police officers are being charged with the death of a refugee from Sierra Leone, who was found burnt to death in his prison cell. The officers claim the man committed suicide. The trial opened on Tuesday. (27.03.2007)

The prize for best professional production went to a television documentary entitled "Death in the Cell - Why Did Oury Jalloh Die?" by German-based journalists Marcel Kolvenbach and Pagonis Pagonokis. (17.12.2006)