German police have arrested a fellow officer accused of killing a man, allegedly for the purpose of cannibalism. The case is reminiscent of a trial that made international headlines a decade ago. 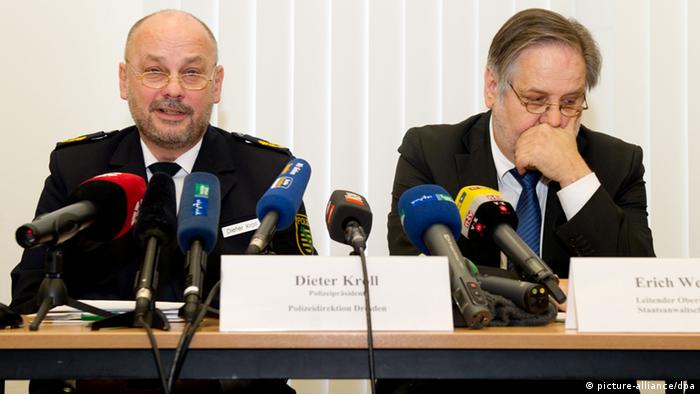 Authorities in Germany's eastern city of Dresden announced on Friday that they had arrested a 55-year-old police officer suspected of murdering an allegedly willing victim and then burying his remains in small pieces in the garden of the police officer's guest apartment.

Dresden's police chief, Dieter Kroll, told reporters at a news conference that the suspected officer had confessed to having slashed the throat of his victim, a 59-year-old man from Hannover, who had traveled to Dresden, which is capital of the regional state of Saxony.

Kroll said there was, however, no evidence that the suspect, an investigative police officer from Saxony, had actually eaten any of his victim's body parts.

The killing had taken place on November 4.

The pair had met at Dresden railway station and then driven to the suspect's vacant rental apartment in the town of Hartmannsdorf-Reichenau, in the Harz Mountain region, where the killing took place.

Kroll said investigators made the grisly discovery during the course of a search for the victim, who had been reported missing by a colleague on November 11.

Data from the dead man's electronic communications eventually led police to the suspect, who in turn led them to the body parts.

The police chief also said it appeared that the suspect had complied with the victim's wish to be killed.

"The victim had been fantasising about being killed and eaten by someone else since his youth," Kroll told reporters.

Police said that while the suspect, who is being held in investigative custody, had confessed to the killing, he had denied intending to eat his victim, even though the two had met on a web site catering to people with cannibalistic fantasies.

Dresden head of criminal investigations Maik Mainda told the press conference that until their web encounter the suspect and victim had "not known each other personally."

"The agreement was that the killing should take place immediately," Mainda said.

International media focused some years ago on a German cannibal Armin Meiwes. On trial, he admitted to killing, mutilating and eating the flesh of a man he had met on the internet.

In 2004, a German court convicted Meiwes of manslaughter and sentenced him to eight and half years in prison.

Prosecutors though appealed the sentence, leading to a retrial, in which he was convicted of murder and handed a life sentence in 2006. Meiwes' appeal of that sentence was denied.