Germany's Federal Police have started a nationwide crackdown on forced prostitution and a "network of organized crime," officials say. The raids mark the largest police action in the decadeslong history of the force. 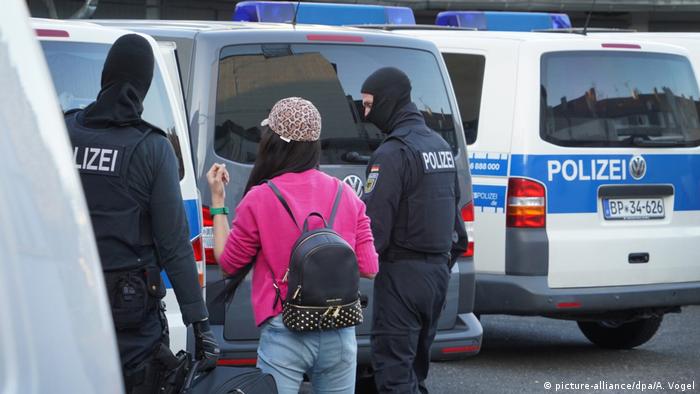 The security forces targeted a gang suspected of smuggling sex workers from Thailand, police spokesman Jens Flören said. According to the mass-circulation Bild newspaper, the Federal Police searched more than 60 brothels and apartments, many of them in the northwest German state of North Rhine-Westphalia. However, police forces were also active in many other regions of Germany.

Police detained a 59-year-old Thai woman in the town of Siegen alongside several other people, according to Bild. The woman is suspected of being a leader of the gang along with her 62-year-old German partner. The two allegedly build a criminal network involving over 50 people, most of them women.

In a separate statement, police officials said the gang used forged visas to bring women and transgender people from Thailand to Germany. The group allegedly charged between €16,000 and €30,000 ($19,800 to $37,120) for the visas and then forced the newcomers into sex work as a way to repay their debts. Hundreds of such workers were then moved from brothel to brothel to avoid suspicion. The investigators are focusing on 17 ringleaders across Germany.

The sex workers were promised they would make money in Germany, but almost all of their earnings would go to their handlers, according to the prosecutors.

"They were not lied about the purpose (of their trip to Germany) but they were deceived when it comes to conditions," officials said.

Prostitution has been legal in Germany since 2002.

"Many hundreds of women and men" were exploited due to the "inhumane, boundless greed of smugglers," he said.

The investigation was first launched in April last year, according to a police spokesman cited by the daily Süddeutsche Zeitung.

On Twitter, the police said it was a "nationwide hit against the network of organized crime." They also the raids provided the investigators with "extensive evidence."

Frankfurt-based prosecutors said seven suspects have been arrested on Wednesday morning. Raids are expected to continue for several more hours.

Officials also said the Wednesday crackdown was the biggest in the history of the organization, which was established in 1951.

The German federal police said they arrested 10 suspects over alleged involvement in the smuggling of foreign workers into Germany. Authorities are seizing assets worth more than €19 million.

Police have carried out raids and executed arrest warrants targeting organized crime in multiple cities across Germany. Among those targeted were criminal "clans" in the German state of North Rhine-Westphalia.