The coin dates back to 1923. The inscription on the coin offers an insight into the economic crisis that plagued Germany after the First World War. 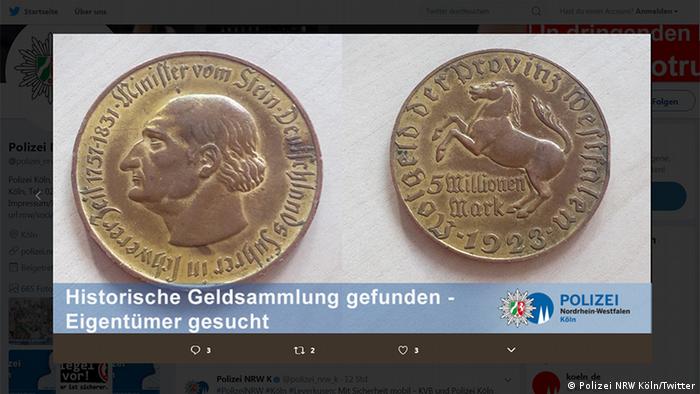 Police in the northwestern German city of Cologne hit an unexpected jackpot when they chanced upon historical coins and currency notes during a drug-related search.

The historical loot was found in a black carry-on suitcase in May 2017, police said on Thursday.

Among them was a 5-million deutschmark coin from 1923, when Germany was in the midst of an economic crisis. Hyperinflation ran rampant at the time, resulting in constantly devalued money. 4.2 trillion marks were worth just $1.

The inscription on the coin reads: "Emergency money from Westphalia Province, 1923," referring to the German state.

World War-era square banknotes from France and the Netherlands were also among the currency notes discovered.

Police said the "unusual packaging" led them to believe that the old cash had been stolen. They published the pictures of the rare find in order to find the original owner, they said.

Police have placed barriers in front the Cologne Cathedral. The measure follows reports that militants sought to target Barcelona's Sagrada Familia - another, albeit more modern, icon of ecclesiastical architecture. (23.08.2017)

The discovery of a bomb buried near the Rhine River has prompted the largest evacuation in Cologne since World War II. Experts are due to deactivate the 1,000-kilogram device shortly. (27.05.2015)

A message in a bottle discovered by a German tourist has achieved a world record. The discovery also came with a monetary reward, albeit one of symbolic value after a century of inflation. (21.04.2016)