A 29-year-old man was arrested near Hanover after police discovered he had hoarded dozens of guns at his father's house. Authorities found Nazi paraphernalia and €100,000 in cash at the suspect's residence. 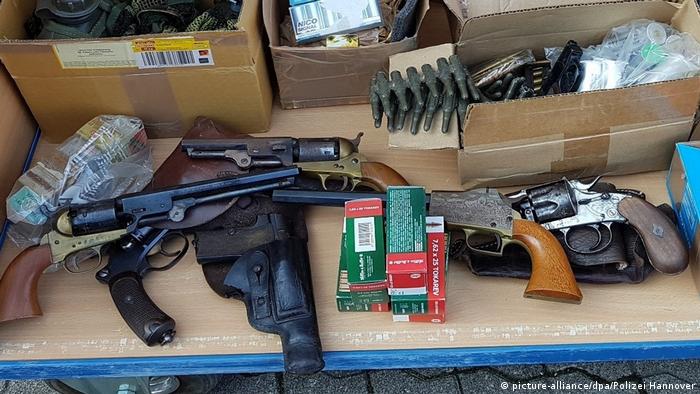 German police in Hanover said on Monday that they had arrested a 29-year-old man in nearby Celle for violating the German gun laws after they discovered 51 firearms at his residence, the majority of which would require a license.

Police were alerted when a person at the residence attempted to purchase a firearm on an internet portal. They had initially suspected the owner of the residence, the 53-year-old father of the man arrested on Monday.

When police confronted the suspect, he struck a 53-year-old investigator in the face. Police said he violently resisted attempts to detain him.

The 29-year-old man was charged with violating German gun laws, assaulting an officer and resisting arrest.

What else did the police find?

Besides the firearms, police found Nazi paraphernalia, including medals and photographs.

Around €100,000 ($113,000) in cash was also discovered at the suspect's residence along with several kilograms of munitions of varying caliber.

In Germany, possession of a firearm is strictly regulated. A license is often required to possess a firearm, which is often provided for competitive sports or hunting. A firearm and its munitions are generally required to be stored separately.