German police launched raids in six northern states Wednesday amid fears that left-wing radical groups were plotting attacks to disrupt a G8 summit in June on the country's Baltic coast. 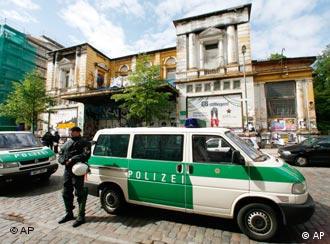 "We suspect those targeted, who belong to the militant extreme-left scene, of founding a terrorist organisation or being members of such an organisation, that is planning arson attacks and other actions to severely disrupt or prevent the early-summer G8 summit in Heiligendamm from taking place," the prosecutor's office said.

The summit which opens on June 6 on Germany's Baltic coast will see German Chancellor Angeal Merkel hosting the leaders of Britain, Canada, France, Italy, Japan, Russia and the United States. Climate change and poverty in Africa will dominate the agenda.

German politicians and security experts have issued warnings of potential violence ahead of the summit.

Police suspect the left-wing militants they are targeting of being behind a string of attacks in and around Hamburg and Berlin. Last December, a car was set on fire in front of the home of deputy finance minister Thomas Mirow and the walls of his home were splattered with paint. The hotel where the summit is to take place has also been vandalized with paint.

On Wednesday, the more than 40 raids across the country included one on the leftist "Rote Flora" cultural center in Hamburg amid concerns it was being used by a domestic left-wing radical group.

The investigation also focused on members of the radical communist organization "Militante Gruppe" (mg), which has claimed 25 attacks since 2001. Most have involved setting fire to a building or vehicle belonging to the police or other public institution. 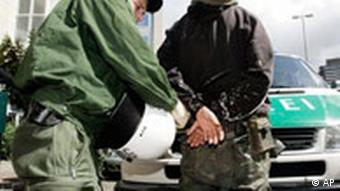 In past letters claiming responsibility for crimes, mg has named disrupting the upcoming G8 conference as a motive.

"We're not dealing here with some left-wing loonies who want to throw a bucket of paint," the online version of news magazine Der Spiegel quoted an investigator involved in the raids as saying. "We're talking here about groups who have terrorism potential."

Protest from the far-left

Anti-globalization groups like Gipfelsoli and Attac have condemned the raids as "a wave of repression" and "criminalization."

"All attempts to criminalize us do not change the fact that we will sue the G8 (summit) to cast a spotlight on the injustices of this world," said Hanne Jobst from Gipfelsoli in a statement. 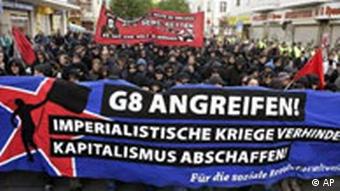 Left-wing demonstrators protest against the G8 summit in Berlin on May 1, 2007

Germany's Interior Minister Wolfgang Schäuble, however, has said that he sees a clear security threat. He has announced has announced a tightening of border controls ahead of the summit. That will mean that the country's visa-free travel policy for Schengen zone members would be suspended during the event, as it was during the soccer World Cup last summer.

Police are bracing for an expected 100,000 demonstrators to gather in the area near the summit venue, a luxury hotel in Heiligendamm on the Baltic Coast, on June 6-8.

Tight security measures are in the works, including a 12 kilometer (7.5 mile) long fence designed to protect diplomats attending the event.

Several G8 summits in recent years have been scarred by violence, most notably the meeting in the Italian city of Genoa in 2001 when an anti-capitalist protester was killed in riots.

Demonstrations at recent G8 summits have been kept well away
from the venue although violence has broken out in nearby towns.

A delegation of Catholic cardinals and bishops called for the Group of Eight most industrialized nations to keep their debt-relief promises to developing countries. (03.05.2007)