Authorities are questioning a businessman over the sale of two high-tech furnaces to Iran. Two other people are under investigation for assisting him with the deal worth 2.8 million euros ($4.1 million). 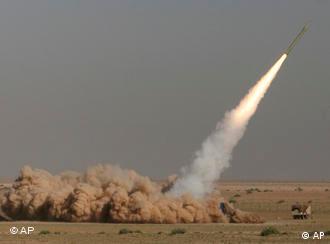 German police have arrested a man they say was exporting equipment to Iran that could be used for missile-building.

German federal prosecutors identified the man on Saturday as Mohsen A., a 52 year old businessman with Iranian citizenship. He was taken into custody after authorities searched several residences and businesses in the states of Thuringia, North Rhine-Westphalia, Hamburg and Bavaria. They were also investigating a 64-year-old German national and a 49-year-old man with dual German-Iranian citizenship.

They are accused of selling a sintering furnace, used to weld metal parts at extremely high temperatures, to Iran in 2007. Such equipment can be used to build long-range missile launching components, and German law forbids their export to Iran, which is under a United Nations embargo.

Prosecutors said that in July 2008, the group was in the process of exporting a second furnace to a front company in Asia that would have sent it on to Iran.

German companies, especially hard hit by trade and economic sanctions against Iran, are worried they are losing lucrative contracts in the oil-rich region to countries such as China and Russia. (16.07.2008)

Iran has shrugged off the threat of additional UN Security Council sanctions over its nuclear program. Six major powers at the UN moved closer toward a draft resolution tightening measures against the country. (13.03.2007)

The five permanent members of the UN Security Council and Germany have reached an agreement on a "carrot-and-stick" strategy in the Iran nuclear crisis. (01.06.2006)