Ever since the World Cup in 2006, collective national euphoria during major soccer championships has been part of German life. That's also true with Euro 2012. Some see the beginnings of a disturbing nationalism. 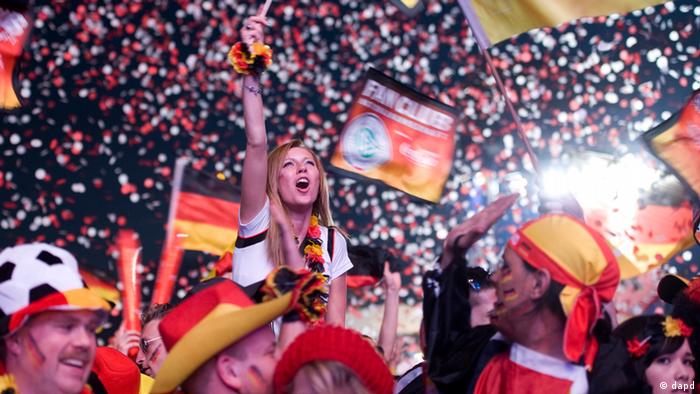 German flags draped from windows, people ardently belting out the national anthem with one hand laid over their hearts: not long ago, images like these would have been unthinkable in Germany. And many still say that in light of the country's past, it's not appropriate to feel and display national pride.

But there was a shift in attitudes when Germany hosted the World Cup in 2006. Suddenly, flag-waving turned fashionable. At the first game of the series against Costa Rica, the German team put their arms around each other as the national anthem played. Thousands of fans in the stadium and in public places around the country joined in. It was a first.

Football has become an outlet for a form of national pride that many Germans welcome as reasonable and healthy. Since 2006, soccer's major tournaments, the World Cup and the European Cup, usher in waves of nationalism.

Berlin social psychologist Dagmar Schediwy took up the issue in her book entitled "Ganz entspannt in Schwarz-Rot-Gold?" ("All Relaxed in Black, Red and Gold?"), which incorporates interviews with German fans on the street during the last three tournaments. Her finding: For most, it's all about expressing their sense of belonging to their country, but the author believes there are psychological dangers in that belief. Schediwy argues that identification with one's own group goes hand in hand with disparaging other groups.

The Bielefeld Institute for Interdisciplinary Research on Conflict and Violence took up these theses in a long-term study. Its findings support the view that German fans grew more nationalistic during the 2006 World Cup than during past championships. Sport scholar Diethelm Blecking has followed the study closely but does not want to draw too many conclusions from it.

"There are just two scientific studies on this topic, and they are not especially representative," he said.

The Bielefeld study, for example, included fewer than 1,000 participants. The report also noted that the feverish atmosphere surrounding the World Cup "did not particularly" increase xenophobia.

"This formulation shows that even the researchers involved are completely uncertain as to the evaluation of these processes," Blecking said. 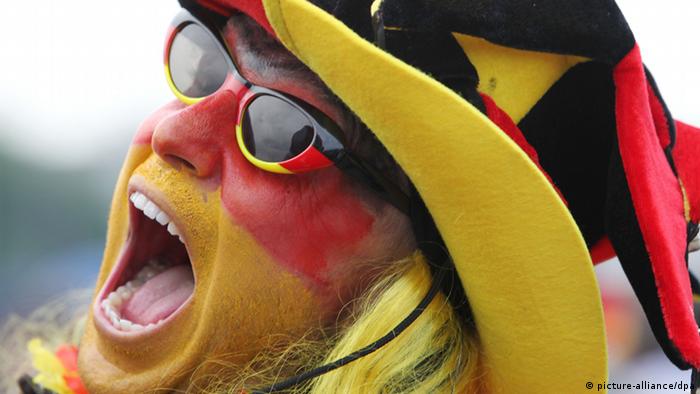 Author Dagmar Schediwy also surveyed just a few hundred people, Blecking said, noting that a few hundred surveyed individuals would stand for the views of 82 million people in this case.

"Those are really very small snippets of the reality," Blecking said. He agrees that 2006 offered a vivid example of Germans embracing national pride, but Blecking believes that the process of embracing such sentiments began in 1990 with the reunification of East and West Germany.

"Already in 1998, author Martin Walser held a famous speech in Frankfurt in which he called upon people to free themselves from the burden of the past. The entire audience rose up after his speech to give him a standing ovation," Blecking explained.

Jürgen Mittag, a professor at the German Sports University in Cologne, offers a more sober view of the situation.

"These sporting matches are increasingly being staged as events, and part of that is using national symbols," Mittag said, adding that nationalism isn't at the root, but, instead, the focus on celebrating Germany is more about creating a general party atmosphere.

"The case with Özil is only just the tip of the iceberg," he said.

Is there a new nationalism that is directed against minorities and aims to push them out of German society? Jürgen Mittag sees it as a case of copycats: "There are isolated groups that take advantage of soccer because it has this major social significance."

For Blecking, the feeling of a collective experience is at the center of all discussions about football. He sees the thesis of burgeoning nationalism as too narrow.

"Many young people today have an existential problem. They don't know what to expect in the next 20 years. So especially young people try to seek out some kind of community in football in order to fill this void," he said.

Both sports experts are sure that soccer championships are short-term events whose effects vanish quickly - particularly in light of the spectacular performance of the multi-ethnic German team during the 2010 World Cup that was followed just weeks later by a book widely regarded as xenophobic - "Deutschland schafft sich ab" ("Germany Does Away with Itself") by author Thilo Sarrazin - became a bestseller.