German officials reject charges of two-classes of swine-flu vaccines | Germany | News and in-depth reporting from Berlin and beyond | DW | 19.10.2009

As Germany prepares for a mass-immunization against the swine flu, there are growing concerns about the existence of two different shots - one for a selected few and one for the rest of the population. 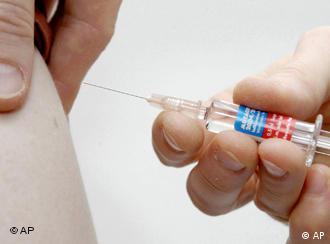 Germans are skeptical of the swine flu vaccine

In one week's time, Germany is scheduled to begin a mass immunization against the swine flu. But the type of shot a person gets is to depend on their position in society, leading to complaints about a 'second class' swine-flu vaccine.

Politicians, certain government employees and members of the German military are scheduled to receive one type of the swine flu vaccine, while average citizens in Germany are to receive a different one.

The difference between the two vaccines is that the one meant for members of the government is said to have fewer side-effects. It also lacks certain additives which are said to be present in the version for the general population.

A spokesperson for the German interior minister, quoted by the Berliner Zeitung newspaper, said that the vaccines marked for the government were ordered months ago, when there were no clear differences between the two vaccines. She added that the other version was not a second-class vaccine.

According to a separate report in the mass-circulation Bild newspaper, Chancellor Angela Merkel and Health Minister Ulla Schmidt are planning on getting vaccinated with the shot provided to the general population.

"It's the same as the rest," said Schmidt, "safe and effective."

The German government has ordered 18 million more vaccinations against swine flu. But two-thirds of Germans say they don't want to be immunized. (09.09.2009)

No one wants to foot the swine flu vaccination bill

Pharmaceutical companies will profit greatly when Germany’s biggest immunization program in half a century gets underway in a few weeks. Health insurers are increasingly skeptical of Berlin’s plans. (07.08.2009)

Before Germany is able to implement its plan to vaccinate 25 million people against the A(H1N1) swine flu virus, the vaccine's effectiveness needs testing. About 1,200 people are needed to take part in the trials. (04.08.2009)