German Nuclear Waste to Go Back to Mother Russia by Air | Germany | News and in-depth reporting from Berlin and beyond | DW | 30.10.2006

German Nuclear Waste to Go Back to Mother Russia by Air

The state of Saxony has applied for 200 kilos (440 pounds) of nuclear waste enriched by uranium to be flown, instead of transported by train, from the former East Germany back to Russia. 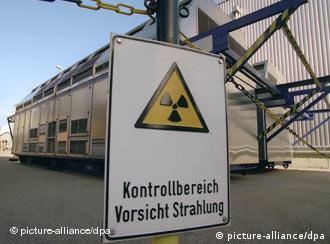 Nuclear waste is usually transported by train rather than by plane

Saxony is seeking permission to fly nuclear waste back to Russia for reprocessing before the end of the year, the German environment ministry confirmed on Sunday. The federal office for radiation protection must first approve the transport.

Safety experts and environmentalists have expressed concerns about the plans. They said the risks involved in transporting radioactive materials by air instead of by train, the most common means of transportation, could be higher.

"We have always stood against transporting nuclear waste by air," said Heinz Smital, a Greenpeace nuclear expert based in Hamburg. "The consequences of an air attack or accident on a plane carrying radioactive material are unpredictable. Uranium, which has been 80 percent enriched, can be weapons grade," he added.

Although the nuclear material to be transported on Dec. 1 contains only 36 percent uranium, it could easily become a "dirty bomb" in the wrong hands, Smital told Die Welt daily. 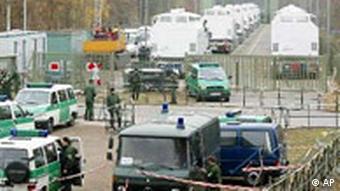 Nuclear waste transports in Germany are usually accompanied by protests

"Arrangements for transporting material and security procedures are outlined in great detail in agreements with contractors. If such information is ever leaked to outsiders, potential terrorists could easily get their hands on radioactive materials," said a high level national security official.

The 200-kilogram load of nuclear waste was produced by a former Soviet reactor in Rossendorf, on the outskirts of Dresden, and was shut down after German reunification in 1991. Under a Cold War agreement by the International Atomic Energy Agency, nuclear material is supposed to be returned to its country of origin.

Other experts say that a specially adapted plane for transporting uranium enriched material is safer than by train.

"That way less can happen to it than on the road or on train tracks," Udo Helwig, the director of the German association for nuclear technology and analysis (VKTA), told the Berliner Zeitung newspaper.

"Considering the length of the trip, it makes sense to use air transport," he said.

Since 2003, there have been four air shipments of German nuclear waste to Russia.

Since mainly non-reactive uranium is being sent back, the dangers from radioactivity should be minimal, according to Helwig. The waste will be brought to the Dresden airport in a secure container truck, with the flight being organized by the Russians themselves. 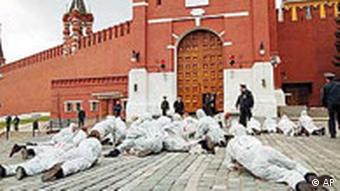 Preparations for flying the waste will take four weeks and would need to undergo vigorous international safety criteria. The waste will be returned to the Russian atomic reactor in Podolsk, which is about 30 kilometers (around 19 miles) south of Moscow, where it will be reprocessed for further use.

A German court on Wednesday gave the go-ahead for the construction of a storage facility for low- and medium-level radioactive nuclear waste, putting an end to a two-decade-long campaign to block the project. (08.03.2006)

German energy giant RWE has suggested one of its nuclear plants should stay online beyond its scheduled shutdown in 2008. Is Germany getting ready to play with nuclear fire again? (24.02.2006)