German Nuclear Reactor Taken Offline After Internal Leak | News and current affairs from Germany and around the world | DW | 06.06.2008 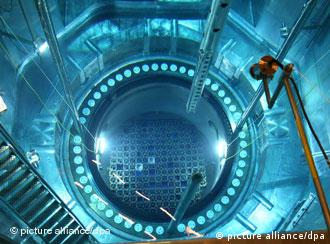 The reactor at Philippsburg

The problem at the Philippsburg plant near the city of Karlsruhe was rated at the second-lowest level, 1 for an "anomaly," on the International Nuclear Event Scale (INES).

The state environmental affairs ministry said falling pressure had been noticed Thursday night in the outer vessel of reactor 1 at the site while the reactor was being powered up and the cause was being sought.

There was no evidence of any release of radioactivity into the vicinity.

The vessel, which encloses all the main parts of the reactor, is supposed to maintain 20 millibars more pressure than the air outside, but had been losing 1 millibar per hour, presumably because of a leak.

Slovenia reassured EU nations on Thursday that a water leak at its Krsko nuclear plant, which sparked alarm across the bloc, posed no danger and that the plant would resume operations next week. (05.06.2008)

Two nuclear power plants near Hamburg were shut down Thursday after a fire broke out in one and a short-circuit in a switching unit occurred in another. The public was at no point at risk, stressed the state government. (29.06.2007)