German MPs start initiative to protect Turkish colleagues from Erdogan | News and current affairs from Germany and around the world | DW | 11.11.2016

Opposition politicians in Turkey are increasingly being stripped of legal immunity and even arrested. Members of the Bundestag across the political spectrum are trying to offer protection by "adopting" them. 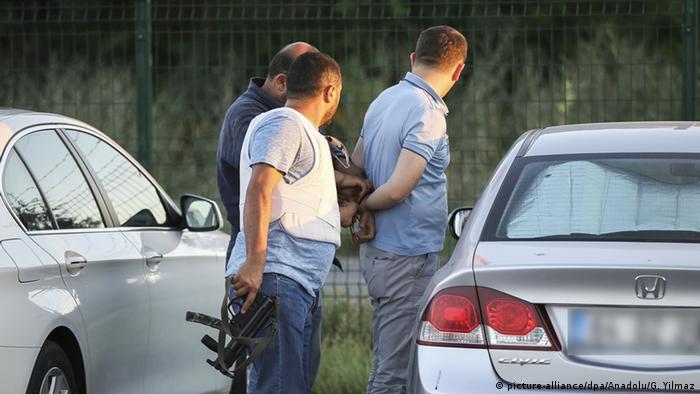 Leading representatives of the Social Democrats, the Greens and the Left Party announced the unprecedented "Parliamentarians Protect Parliamentarians" initiative on Friday, shortly after the Turkish government arrested five parliamentary aides from the pro-Kurdish Peoples' Democratic Party (HDP) and the chief executive director of a major Turkish opposition newspaper Cumhuriyet.

The Turkish government under President Recep Tayyip Erdogan has rescinded the legal immunity of 53 of 59 HDP deputies and arrested dozens of parliamentarians, party employees and journalists. That has prompted prominent members of the Bundestag to  "adopt" their threatened colleagues under the rubric of an existing parliamentary program of sponsorship for politicians, human rights activists and others.

"In the history of the program, there has never been such an extraordinary situation where I think we can say that a democracy is threatening to turn itself into a dictatorship," said Social Democratic MP and human rights expert Frank Schwabe at a press conference in Berlin. "We have a lot of Turkish opposition parliamentarians under threat, so we had to apply the parliamentary sponsorship program in an extraordinary way."

Schwabe said that 60 German MPs, including representatives of the conservative CDU-CSU, had agreed to "adopt" 37 to 38 members of the HDP. Tom Koenigs of the Greens said that what was happening in Turkey at the moment was unique in the modern history of the country.

"There has never been an instance of a whole political group being persecuted and having their immunity from prosecution rescinded like this," Koenigs said. "Immunity is there, explicitly, in order to protect politicians from political persecution."

The German politicians said that the initiative was intended as a "symbolic act of solidarity" with their Turkish colleagues. But can such gestures offer any real protection? 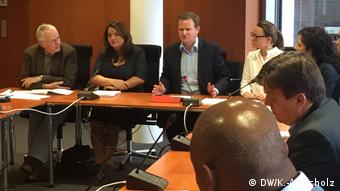 German MPs are making a statement about political repression in Turkey

A responsibility not to look away

The German politicians told emotional stories at the press conference about their interactions with Turkish deputies.

"On a delegation trip last week, I personally witnessed the arrests of our HDP colleagues in the Turkish parliament," said Michelle Müntefering of the Social Democrats. "We had planned to have talks with the co-chairwoman of the party, (Fiden) Yüksekdag, but they didn't happen because she was detained the night before. Especially because of our experiences with the curtailment of political freedom in Germany in the past, we parliamentarians have a responsibility not to look the other way."

The plan is to ramp up public attention in the future, with German politicians keeping close tabs on what happens to their "adopted" Turkish colleagues.

"Unfortunately we're not able to get the parliamentarians released from prison," said Left Party MP Sevim Dagdelen. "In the coming weeks, we'll be considering concrete measures like bipartisan trips by Bundestag members to Turkey, requests to visit parliamentarians in jail and talks with their family members and attorneys."

Koenigs said that attempted prison visits were a viable way of helping political figures under threat.

"This program has been around for quite a while and I had a concrete experience of applying to visit a politician - not in Turkey but another country - whom I had sponsored," the Green human rights expert said. "At first I was refused permission, but then I did get to visit him and his conditions in prison significantly improved because it was clear that public attention was present. That's what we're aiming to do with the Turkish parliamentarians."

Fighting an attack on democratic principles

Ali Atalan is one of the politicians who has been "adopted"

One person who's especially familiar both with the threats faced by Turkish MPs and the potential pressure Germany can put on Ankara is Ali Atalan. The former member of the regional parliament in North Rhine-Westphalia, who came to Germany from Turkey in 1985 at the age of 17, was elected as an HDP delegate to the Turkish parliament last year.

Like most of his fellow HDP parliamentarians, he's been stripped of immunity from prosecution. Currently in Germany to drum up support for the Turkish opposition, he knows he could well face arrest when he returns to Turkey.

"Erdogan is a man who doesn't listen to anyone and who has suspended the rule of law, the functioning of parliament and all division of power," Atalan told Deutsche Welle after the press conference. "The judicial system, the parliament and the government are being held hostage."

Atalan has been "adopted" by Koenigs and says that Germany has a special role to play in the Turkish political crisis.

"Because of the traditionally close connections between Germany and Turkey and the fact that current relations between them are relatively good, it's possible to exert an influence on the Turkish government and Erdogan," Atalan said. "But of course there has to be commensurate pressure from within Turkey itself."

There have been mass arrests and political purges in Turkey since an attempted military coup d'etat in Turkey last July, after which Erdogan warned that his opponents would "pay a heavy price." The president's subsequent hardline approach has drawn criticism from throughout the European Union as being incompatible with the principles of democracy. But despite the situation, Atalan remains optimistic about change.

"The situation is hardly exhilarating, but we can't afford to be pessimistic," Atalan said. "We have to keep fighting - otherwise he'll keep getting closer to his goal of setting up a dictatorship in Turkey."

The "Parliamentarians Protect Parliamentarians" initiative hopes to be part of that fight and will encourage German Foreign Minister Frank Walter Steinmeier to take Erdogan to task when he visits Turkey next week.