Development Minister Svenja Schulze has called on Russia to allow delivery of tens of thousands of tons of grain stuck in Ukrainian ports. She also pledged Germany's help in reconstruction. 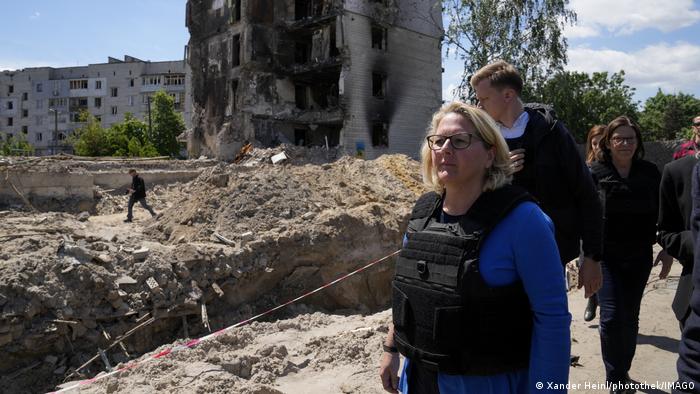 Germany's Development Minister Svenja Schulze was in Ukraine on Friday, pledging increased civilian support for reconstruction efforts and calling out Russian President Vladimir Putin for blocking the delivery of tens of thousands of tons of Ukrainian grain.

"It is Putin's fault that many countries are now on the brink of widespread hunger," Schulze told German news agency DPA. She was referring to the silos of wheat and other grains stuck in Ukrainian ports and areas now occupied by Russian forces. Such deliveries of grain are vital to much of the developing world.

Schulze was also due to speak with several top officials in Kyiv, including Prime Minister Denys Shmyhal, and Minister for the Reintegration of Occupied Territories Iryna Vereshchuk.

The Social Democrat (SPD) minister toured a farm outside of the capital, as well as a shelter for the internally displaced.

"Everywhere in Ukraine, the terrible consequences of Putin's war of aggression are visible. I am speaking here with people who have had to leave their destroyed towns and with farmers whose existence is threatened. Many farmers cannot harvest, and wheat is missing in Ukraine and around the world," Schulze said after the visit.

How can the West stop Russia's food war in Ukraine?

The development minister also used her trip to discuss how Ukraine plans to reconstruct its devastated towns and cities. To that end, Schulze highlighted a recovery fund set up by her ministry that has seen its budget increase to €185 million ($198 million) in recent weeks.

"We must not wait until the war is over," she said of the fund and the projects it will support, "we must start already now, to help and to build."

Schulze's visit comes following months of criticism for Chancellor Olaf Scholz for what some perceive as failing to display the kind of leadership that Western allies have come to expect from Germany in recent years.

Berlin has been criticized for a delay in sending heavy weapons to Ukraine and the chancellor has thus far rejected calls to travel to Kyiv.

Ukrainian leader Volodymyr Zelenskyy is wondering why some in the EU "hold such power" to block the sixth package of sanctions against Russia, which includes an oil embargo. DW has the latest.