German Minister Calls for Ban on Carry-On Liquids on Planes | Europe | News and current affairs from around the continent | DW | 16.08.2006

German Minister Calls for Ban on Carry-On Liquids on Planes

European Union interior ministers met in London on Wednesday for talks on how to improve and unify anti-terrorist measures across the bloc. Germany's interior minister called for stricter rules on carry-on luggage. 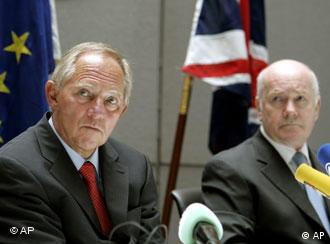 Germany's Interior Minister Wolfgang Schäuble on Wednesday called for an EU-wide ban on liquids in carry-on luggage on commercial air flights after a meeting of EU interior ministers in London.

"Based on what we know, we should actually prohibit the carrying of liquids in hand luggage," Schäuble said. "They involve risks that we haven't been able to rule out so far with sufficient certainty."

Airports around Europe have beefed up security after reports last week that terrorists in Britain were planning to smuggle liquid explosives in hand luggage with battery triggers possibly stored in laptops or calculators.

Schäuble also appealed for a level of control and security that could be accepted as a permanent measure, without giving off the impression "that we are first reacting very hastily and then pretending that nothing has happened." 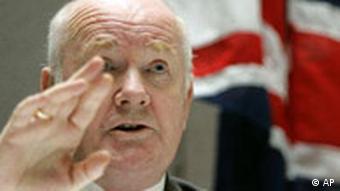 British Interior Minister John Reid, who hosted the talks at the Home Office, urged his European Union counterparts to make sure that anti-terror measures were consistent throughout the 25-member union.

"It's very important that the measures that are taken in one country are reflected in other countries because we want equal security for all our countries," Reid said.

The home secretary expressed regret over the flight disruptions caused by the tight security imposed since Britain announced it had foiled an alleged plot to blow up US-bound airliners.

"I want to thank my European colleagues but also the many visitors to this country who have put up with the inconvenience of the last few days," Reid said. "It's not possible to fight terrorism without inconvenience. It's deeply regretful if someone loses their baggage. It's far more regretful if they lose their life."

"It's terrible if somebody is delayed, but a delay is more acceptable than death," said the minister, flanked by Schäuble and France's interior minister, Nicolas Sarkozy.

Fighting terrorism is a priority 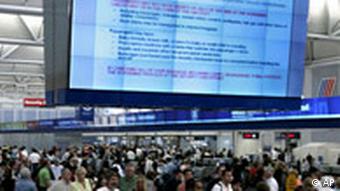 "The inconvenience has not been imposed for the sake of imposing it. It has been imposed in order to defeat terrorism and to protect our public and that is what the three ministers have as our highest priority," Reid said.

Britain has said it is currently holding 24 people in custody in connection with the alleged plot. The spotlight has turned on Osama bin Laden's al Qaeda group since Britain on Thursday swooped on suspects in pre-dawn raids.

The British authorities investigating the case have since released one person and arrested another while Pakistan says it could extradite Rashid Rauf, a British al Qaeda suspect, to Britain.

The arrest of Rauf and another Briton earlier this month helped foil the alleged plot, Pakistani officials say. The White House, however, has stopped short of blaming al Qaeda, saying only that the alleged plot "looks like something al Qaeda would do." 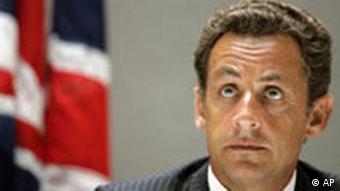 Sarkozy told reporters in London that there is "a pile of elements that make one think that the nebulous al Qaeda is not far removed from what could have happened."

The French interior minister recalled that "a heightened threat" of terrorist attack remained in France "even if at the moment we speak, there is no known link with what could have happened in Britain."

In addition to Schäuble and Sarkozy, also present were the interior ministers of Finland, Portugal and Slovenia as well as the European Commission Vice President Franco Frattini and the EU's counter-terrorism coordinator, Gijs De Vries.

The Home Office said the meeting would "brief EU colleagues on the emerging threat and current operation, accelerate EU action where necessary, and re-affirm the EU's commitment to counter-terrorism work.

"International cooperation is absolutely essential to combat terrorism," it stressed.

The thwarting of a plot in Britain to blow up aircraft in mid-flight has underlined the need for Europe to stay both tough and vigilant when it comes to fighting terrorism, according to security experts in Germany. (Aug. 11, 2006)

The foiled plot to blow up planes flying from Britain to the US has reignited a security debate in Germany with politicians split on tightening counter-terrorism laws. (Aug. 11, 2006)