Many African soldiers have been trained by the German Armed Forces, but the military training assistance program is under scrutiny. In recent years, German-trained soldiers staged a coup and shot at civilians in Guinea. 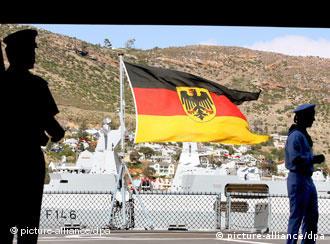 Over the last decade, Germany's military cooperation with African countries has been organized and implemented by the Foreign and Defense Ministries. In fact, the military training assistance program has trained defense personnel from 28 African countries and over 1,200 experts.

"The military training assistance aims at strengthening relationships with other countries and thereby also teach democratic ideals. That is a good thing. It is military training, but from the basis of what we have in Germany," he told Deutsche Welle.

South Africa is one of the countries benefitting from military cooperation and assistance from Germany. Captain Lisa Hendricks, South African Defense Attache to Germany, told Deutsche Welle that "the training provided by Germany has been invaluable to the South African Defence Forces." 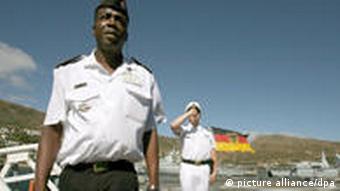 South African Navy and the German Navy carry out exercises

According to the German Information Center Pretoria, Exercise Good Hope IV, which was held around Cape Town, included live missile and gun firings, anti-submarine warfare, anti-aircraft drills, fleet work and maneuvering. The exercises were the largest undertaken by the German Task Force Group outside of its NATO obligations.

When it all goes wrong

But military cooperation does not always yield the desired results. The example of Guinea in West Africa shows that the ideals of democracy and rule of law are not always successfully transmitted. In September 2009, German-trained paratroopers gained notoriety when they shot at peaceful demonstrators.

And in December 2008, Moussa Dadis Camara overthrew the government in what is sometimes called the "German Coup." His trademark was a red beret with a bronze eagle - the symbol for German paratroopers. Camara's rule only lasted until December 3, 2009, when there was an assassination attempt on his life. He was then replaced by his Vice President, Sekouba Konate (a French-trained paratrooper).

Unlike his position as President of Guinea, Camara acquired his beret legitimately during his four-year training with the German Armed Forces. Like him, many other rebels were trained in Germany; including Finance Minister Mamdou Sande and Security Minister Mamadouba Camara. 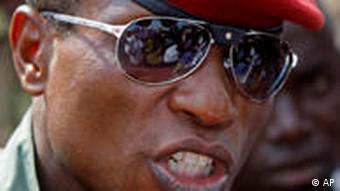 As a result of the series of unfortunate events involving German-trained officers, Germany has ended its cooperation with Guinea. The last soldiers will leave Germany in February 2011.

Thomas Silberhorn said that the right decision had been made vis-a-vis Guinea. He supports training assistance in principle, but only as an instrument of democratization.

"The military training assistance should not contradict its goal of teaching democratic ideals," he said.

Most of the criticism regarding military cooperation has to do with the lack of transparency of these programs: what is being taught and what does Germany stand to gain?

In the case of South Africa, the country has purchased all its warships and submarines from Germany in the last 10 years. Also, German defence personnel have had the opportunity to fire live missiles during exercises in South Africa - something they cannot do in their own country.

But no one at the German Foreign Ministry and Defence Ministry will comment on what qualifies an army to be a cooperation partner. So, even the armies of Ethiopia, Nigeria, and the Niger, which according to Amnesty International's Mathias John commit human rights violations, receive training assistance.

"A general statement from the German administration that it is improving human rights worldwide is not enough. Armed forces, security forces reform, justice and police reform are very important in many countries," he said.

"There is a whole range of countries, where we don't know exactly what can happen in the future, where the soldiers always continue to commit human rights violations. So we ask ourselves on which criteria the federal government decides which training assistance to accomplish and to what extent the focus should be on human rights," he added.

The European Union is preparing an arms embargo and sanctions against Guinea after the military junta launched a violent crackdown on opposition protesters. (21.10.2009)

The German parliamentary commissioner for the armed forces, Reinhold Robbe, has blasted the country's political and military leaders for their ongoing failure to prepare the German army for combat. (16.03.2010)