Ahead of a new round of wage talks, workers employed in the German metals and engineering industries have started walkouts in several of the country's 16 states. They do not just want more money. 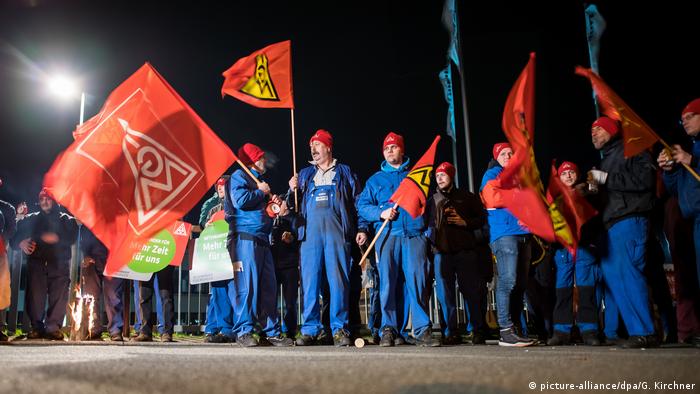 Warning strikes kicked off shortly past midnight Monday in the German states of Bavaria and North Rhine-Westphalia, home to important metalworking and engineering companies.

The country's largest union, IG Metall, is demanding a 6-percent wage hike this year for the roughly 3.9 million employees it represents.

"We will build pressure with our first wave of warning strikes so the employers finally show some movement in negotiations," the head of IG Metall in Bavaria, Jürgen Wechsler, said in a statement.

In two previous rounds of wage talks, union representatives and employers had failed to agree on future pay structures. Employers dismissed the union's pay claim as excessive and so far only offered a 2-percent wage increase as well as a €200 ($241) one-off payment in the first quarter.

A third round of negotiations is scheduled to start on January 11 in the state of Baden-Württemberg, to be followed by talks in Bavaria and North Rhine-Westphalia a couple of days later.

Apart from higher wages, IG Metall has also been campaigning for an option for some employees to reduce their working week to 28 hours. It said this went particularly for shift workers, parents with young children and people having to look after relatives.

Metalworkers union IG Metall and western German steel industry employers have reached a wage agreement that could serve as pilot deal for the whole sector, and coming at a time of hope for the struggling industry. (17.03.2017)